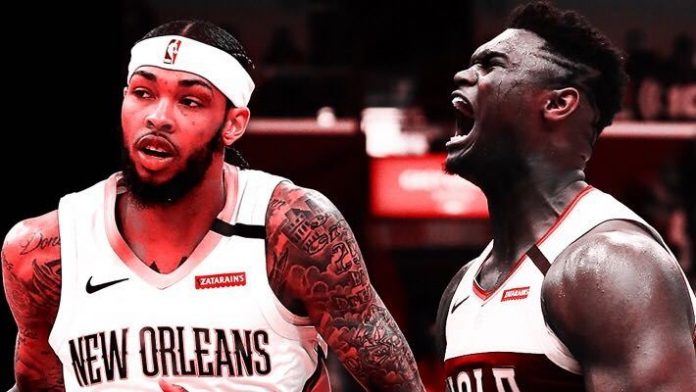 Tuesday night was a big one for both halves of the New Orleans Pelicans’ dynamic young duo. For Zion Williamson, he was afforded the first opportunity to go toe-to-toe with LeBron James, the man with whom he’s been compared ever since he was selected No. 1 overall in the 2019 NBA Draft. For Brandon Ingram (and Lonzo Ball and Josh Hart), he got the chance to return to where he started his NBA career, only to get traded this past offseason in the monster deal that landed the Los Angeles Lakers Anthony Davis.

The Pelicans were unable to come out on top, in large part because James and Davis combined for 61 points, 22 rebounds, nine assists, and seven blocks. But if there is a silver lining to the cloud that is a 118-109 loss, it’s that Ingram and Williamson gave us our latest glimpse into why the future is so bright on the bayou.

Ingram had the latest big evening in what has been an All-Star season, scoring 34 points on 12-for-20 shooting, ripping down seven rebounds, doling out four assists, and recording a pair of steals. Williamson, meanwhile, took out a piece of real estate at the free throw line. He scored 29 points, going 8-for-18 from the field and 13-for-19 at the charity stripe. For good measure, he also recorded six boards, three dimes, and a steal.

“I think they’re gonna be fine,” Pelicans head coach Alvin Gentry said after the game. “Both of those guys are unselfish guys, and you know, they play for the betterment of the team. I thought they did a good job. We played with a lot of confidence against, for me, there may be a better team in the NBA, but we’ll see.”

With the two of them in the lineup — an admittedly very, very small sample size — the Pelicans are 6-6 on the year. It’s nothing earth-shattering, but playing .500 ball this year would earn the squad a spot in the postseason. Add in that New Orleans is trying to incorporate a new, high-usage player like Williamson mid-season to a group that had just appeared to have righted the ship, winning 11 of 16 prior to his debut on Jan. 22.

Wednesday served as their greatest test, and while they couldn’t quite come out on top, the pair did battle admirably against the mighty Lakers. James was especially impressed by what he saw in his first time going up against the reigning No. 1 pick.

It’s not hard to be impressed with Williamson, just like it’s not hard to be impressed with what we’ve seen out of Ingram this. Initial concerns about their potential fit — Williamson projects as a 4, the position where Ingram has thrived this season — haven’t been quite as big of a deal. There have been some issues on offense, as Cleaning the Glass indicates lineups with those two on the floor are scoring 105.7 points per 100 possessions (putting them in the 19th percentile of lineups), but defensively, they’ve been stout, a bit of a surprise considering Williamson is still getting a crash course on life in the league at that end.

“He’s got good quickness,” Gentry said of his prized rookie. “I think he doesn’t mind the physicality of the game. There’s areas, like I said, he’ll get better defensively, the more he’s out there, the more he plays. He’ll understand angles and how to get the ball in positions that favor him more, but he’s 11-12 games in, he’s a 19 year old, and that’s the way we’re going to approach it.”

Despite the fact that Ingram is going to be a restricted free agent at the conclusion of the season — the team does, apparently, view him as a building block and wants to bring him back after he hits the market this summer — these lineups represent the future of the Pelicans team. Guys like Ball and Hart will be part of that future, while a player like Jrue Holiday is there to help speed up this process and show everyone the ropes for the time being, but the two building blocks are the former Duke standouts who should be among the best players in the league as the years go one.

Tuesday night didn’t serve as a chance to draw gigantic conclusions, but instead, it gave a quick glimpse into a future where those two youngsters can go up against any dynamic duo. And with how captivating this team is right now, maybe that future isn’t as far away as one might think.

Martin Rickman contributed to this reporting from Los Angeles.