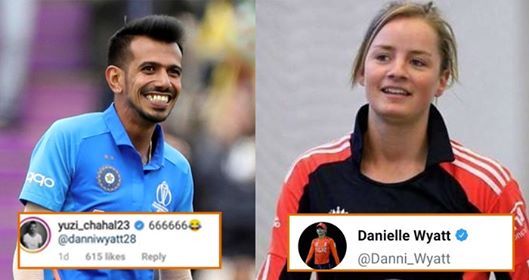 Indian leg-spinner, Yuzvendra Chahal is everyone’s favorite cricketer on social media as the cricket universe have seen the likes of Virat Kohli and Rohit Sharma roast the Haryana-born superstar several times. While Kohli teased Chahal when he posted a picture with Kieron Pollard, Rohit compared the Royal Challengers Bangalore star with The Rock.

Recently, he had posted a photo with Rishabh Pant on Instagram where English women’s cricketer, Danielle Wyatt left a heart-touching comment filled with a starry emoji. Now, when Wyatt posed a picture on her account, the Indian player decided to return her favor albeit in a funny way.

The wicket-keeper batswoman posted a picture of herself batting in the nets. Chahal tried to pull her leg by commenting ‘6,6,6,6,6,6’ on the picture. He seemingly hinted at Yuvraj Singh’s six sixes against Stuart Broad while also trolling Wyatt in the process.

But, the English female cricketer responded Chahal in a better manner. She replied that she could only achieve that feat if the Indian leg-spinner was bowling to her. It will be intriguing to see what’s next in the Chahal-Wyatt saga as the cricket fans are loving every bit of their social media interactions.

The Indian cricket lovers are waiting for Chahal’s reply but it is unlikely that he would have anything to say after the way Wyatt roasted him on the photo-sharing site.

As far as the cricket field is concerned, Chahal is currently playing for India in the ODI series against New Zealand. The Kiwis have taken an unassailable lead of 2-0 in the series while on the other hand, Wyatt is prepping herself up for the approaching Women’s T20 World Cup. She will look forward to helping England win the mega-even which will begin soon in Australia.