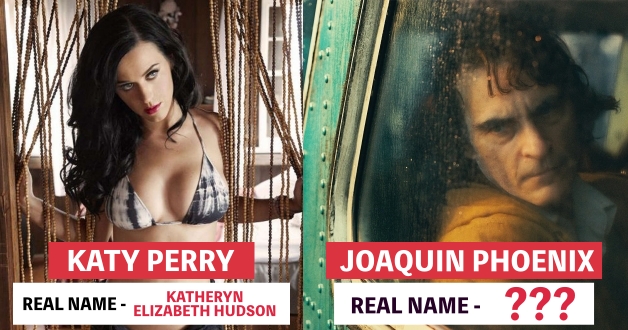 If you’re one of those people who thinks they know everything about every celebrity, think again. (Unless you happen to know who Ella Maria Lani Yelich-O’Connor is.)

Dozens of stars opt to change their real names before they are famous, choosing to go by more unique or interesting monikers.

Here are some celebrities whose real names will surprise you:

Fans might have raised an eyebrow when Taylor Swift thanked her then-boyfriend “Adam” at the 2016 iHeartRadio Awards — but the DJ goes by Adam Richard Wiles when he’s not spinning records. He decided to change his name “to exploit the racial ambiguity of his stage name,” according to Esquire.

The Trinidadian-born rapper’s stage moniker is a shortened version of her real name, Onika Tanya Maraj.

Apparently the name Mark Sinclair didn’t sound tough enough for the actor.  The action star shortened his mother’s maiden name Vincent to get his new first name. As for “Diesel,” he got the nickname from friends who said he was always full of energy.

No, her real name is not secretly Rachel Green — It’s Jennifer Linn Anastassakis! Her Greek father, actor John Aniston, changed the family last name when he went into show business.

The actress’ moniker might sound short and sweet, but her real name is quite a mouthful: Margaret Mary Emily Anne Hyra.  She began using her grandmother’s maiden name “Ryan” as a surname.

Her real surname is Hall. The actress originally changed her surname to Keaton, her mother’s maiden name, because there was apparently another actress named Diane Hall.

Before he emerged as David Bowie in the mid-sixties, he was Davy Jones. The eccentric pop singer changed his stage name so as not to be confused with Davy Jones of The Monkees. Probably a smart move.

Paying tribute to Oscar Wilde, one of her favorite authors, the actress changed her last name from Cockburn when she began acting.

The pop star was born Katheryn Elizabeth Hudson but changed her name so she wouldn’t be confused with actress Kate Hudson.

Cyrus legally changed her name from Destiney Hope to Miley (a rendition of her childhood nickname “Smiley) in 2008.

The Bulgarian actress shortened her name from Nikolina Konstantinova Dobreva.

The Oscar winner was born Eric Marlon Bishop but changed his name to the more gender-ambiguous Jamie Foxx during his days performing stand-up comedy. The actor-comedian chose the more femine-sounding name because female comedians were often called to the stage first, Yahoo reports.  He chose “Foxx” in honor of Sanford and Sons’ star Redd Foxx.

The actor was forced to change his name in order to enter the actor’s union since his birth name, Michael Douglas, was already taken by another future Academy Award nominee.

Born Neta-Lee Hershlag, the actress, who has dual American and Israeli citizenship, took her paternal grandmother’s maiden name “Portman” as her stage name for privacy reasons.

Turns out, the singer’s name and impressive piano skills are no coincidence! She changed her name from Alicia Augello Cook to reflect her love of music.

The origins of Hepburn’s true name are shrouded in mystery. Sources have disagreed on the exact birthname of the Belgian-born actress, but The New York Times reported she was born Edda van Heemstra Hepburn-Ruston. The names Edda, Audrey (the English form of the Dutch name Edda), and Andrey (a feminine form of Andrew) can be found in different biographies, although Edda is found most frequently, according to Britannica.

Marilyn Monroe might be an iconic name, but her greatest fans know her as Norma Jean Mortenson. Marilyn legally changed her name back in 1956. She changed it after studio executive Ben Lyon suggested she go with something that popped better as a stage name.

Born Peter Gene Hernandez, he later told Latinamagazine, “My dad nicknamed me Bruno since I was 2 years old. “I was going to go by ‘Bruno,’ one name. Mars just kind of came joking around because that sounds bigger than life. That was it, simple as that.”

He might be the one and only Tom Cruise in Hollywood, but not in his family! The actor’s birth name is Thomas Cruise Mapother IV. He began using his middle name as a surname at the behest of an agent.

The actor’s parents changed the family last name from Bottom to Phoenix to represent a new beginning.

Born Caryn Elaine Johnson, the Oscar winner has explained that her stage name “Whoopi” comes from whooppee cushion.   “If you get a little gassy, you’ve got to let it go. So people used to say to me, ‘You’re like a whoopee cushion.’ And that’s where the name came from,” she told.