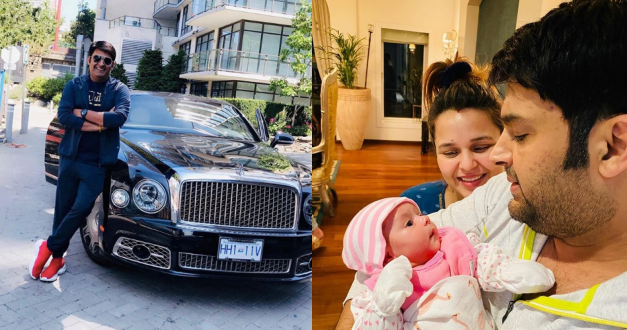 The comedian Kapil Sharma , who is one of the most popular one in the industry , whether negative or positive , he is talk of the town for many reasons. His name featured in Forbes highest-earning Celebrities of 2019 list. He reportedly earned about Rs. 34.98 crores in 2019.

His name is in the list of highest earning celebs today.According to the sources, the comedian’s net worth is around Rs. 170 crores approx and he annually draws an income of more than Rs 30 crores.

Today , we are just throwing some light on his net worth . Let’s have a look:

When we talk about his profession , he has achieved a big success from his show ” The Kapil Sharma Show” although , his show has been changed in the telecast from Colors TV to Sony channel.

He earns a hefty amount by his hard-work and witty skills ,which he applies in the show brilliantly. Kapil charges somewhere between Rs. 80 lakhs to Rs. 90 lakhs per episode for Sony TV’s for his show. The actor and his team draws a handsome sum of around Rs. 80 lakhs from their solo and private shows.

As per Republic World report, Kapil is very fond of cars. Reportedly he owns a Mercedes-Benz S-Class, which costs around Rs. 1. 19 crores. Apart from that he also owns a Volvo XC90 (of Rs. 1.3 crores approx.) He also apparently owns an Rs. 5 crores vanity van. The actor has also made several investments in real estate. Apparently his Mumbai residence’ value is around Rs. 8 crores. He also has multiple real estate properties in his name. He even owns a production company K9 Films, which produces Hindi as well as Punjabi films. These are some of his major investments .

Apart from his investment in the Real estates and production house , he also earns a handsome amount through brand endorsements. He has collaborated with brands such as Honda, OLX and Policy Bazaar.

It’s so amazing to know that one can actually earn a good money on the basis of his talent and skills purely. We wish Kapil more success ahead .