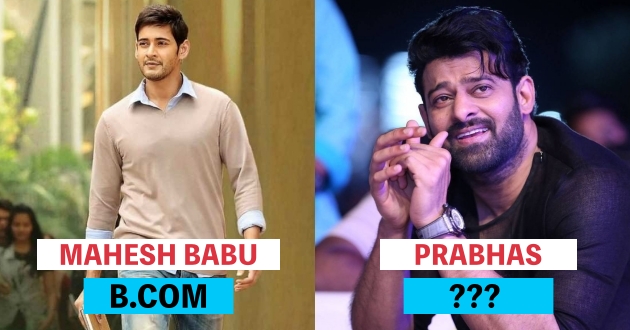 We all know actors for their looks and their performances. We don’t look at their degrees much because we hardly expect geeks to be on stage entertaining us with their performances. It is hard to imagine a nerd mesmerizing us with his performance or beating up the baddies. Also, it is very rare to find actors or actresses who give importance to education over their acting careers.

Coming to Tollywood not many heroes are highly educated as most of the heroes are dropouts or only have a minimum education. But, there are some who defied this trend and their qualifications will leave you awestruck. Let’s take a look at those who completed their academics before gracing the silver screen.

Who doesn’t know this actor? His movie Baahubali, which had us guessing why Kattappa killed Baahubali? And now, the sequel to this Nationwide Blockbuster has made him the most searched celebrity on the internet. Prabhas Raju Uppalati is a famous actor, has done a lot of work in Telugu and Hindi films. He has done his schooling from DNR School, Bhimavaram and Intermediate from Sri Chaitanya College, Hyderabad. Later he did his B.E. B.Tech. This handsome and talented actor has won a lot of awards and has also been nominated for many.

Ravi Teja is an Indian film actor known for his work in Telugu cinema. He is widely considered as one of the most popular and highest paid actor of Telugu cinema who has appeared in over sixty films. Teja completed his schooling at N.S.M. Public School, Vijayawada. Later on he completed his Bachelors in Arts at Siddhartha Degree College, Vijayawada.

Allu Arjun, a handsome actor of Tollywood, first acted as a child actor in the movie Vijetha. Born in Chennai, he has completed his schooling from St Patrick and later went on to get his BBA degree from MSR College, Hyderabad. His acting skills are seen in Arya, Bunny, Varudu. Being an actor, he is also an entrepreneur.

Mahesh is known for his spontaneous acting style and has numerous fans. He was educated at St. Bede’s Anglo Indian Higher Secondary School in Madras. Tamil hero Karthi was his schoolmate. Mahesh performed above average in education. He completed B. Com and obtained a bachelor’s degree from Loyola College in Chennai. Mahesh cannot read or write Telugu script, though he can speak fluently, as he spent his childhood in Tamil Nadu.

When he finally wanted to become a full-fledged actor, he went to Visakhapatnam and was trained in acting under L. Satyanand which went on for about four months. Being unable to read and write Telugu, he memorise the dialogues given by his directors during the dubbing phase of his films.

Dulquer Salmaan is a popular actor predominantly working in Malayalam cinema. He did his initial schooling at the Toc-H Public School, Kochi. Later, he continued his education at Sishya School, Chennai. He graduated in Business Management from Purdue University, USA. Dulquer worked for a while in the US after his studies. Dulquer before making his entry into the film Industry attended a three-month acting course at the Barry John Acting Studio, Mumbai.

We all know Sudeep as an actor. Did you know that he also has a degree in Engineering? Yes, he has done Industrial and Production Engineering in Dayananda Sagar College of Engineering, Bangalore. He studied at Roshan Taneja School of Acting as well.

9- Prithviraj Sukumaran (Bachelor Degree in IT)

Born in Trivandrum, Kerala, Prithviraj did his initial schooling at St. Mary’s School, Poojappura, which was near to his Chengallur home. Later, he did his schooling from the Sainik School (Kazhakkoottam, Thiruvananthapuram) and Bharathiya Vidya Bhavan, Thiruvananthapuram.
He was still pursuing his Bachelor’s in Information Technology at the University of Tasmania, Australia, when he was selected by Renjith to play the lead role in his directorial debut film Nandanam. It was Fazil, a leading Malayalam film director, who introduced him to Renjith.

Following a decent performance in Nandanam, he was flooded with several offers from the industry, so he decided to take a break from his studies and concentrate on acting.

Naga Chaitanya in his young age was very much interested in music. In fact, he was the bass guitarist for his high school band and also used to play keyboard for them. He went to Trinity University in Texas to study Keyboard playing. Then he continued his  studies in India and did Bachelor in Commerce in Hyderabad. Later to pursue his acting career, he studied Acting and Martial arts in New York Film Academy, Los Angeles.

King Nagarjuna is one among the stars who did their education abroad. He has done his Bachelors in Technology from Guindy Engineering College from Madras. Later he moved to the USA where he did his Masters in Automobile Engineering in the University of Michigan. His father Akkineni Nageswara Rao was an eminent actor, following his footsteps, Nagarjuna entered in Tollywood industry with Vikram in 1986.

Among the young bunch of actors, Kalyan Ram is highly educated. The actor was brilliant in his studies and holds degrees from some prestigious institutes. After completing his masters,the actor continued his career in the movies. He holds a degree from BITS Pilani and later on he went to the USA to complete his MBA from an American university.