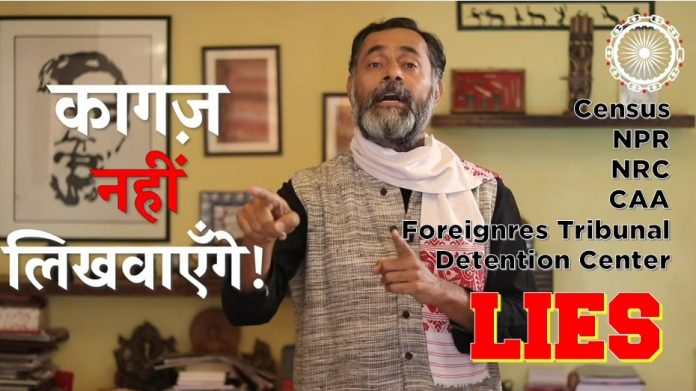 As the relentless campaign of left-liberals against the CAA-NRC-NPR on the basis of absolute lies continues, ultra-Left-wing activist Yogendra Yadav has gone a step further in fearmongering about them. In a video published on February 10, the psephologist turned activist-cum-politician made imaginary links among census, NPR, NRC, CAA and detention centres, and urged people to oppose them.

In the video, Yogendra Yadav says that in a few months’ time, census enumerators will start visiting houses to collect data. Along with regular census data, they will also ask for details like Aadhaar card number, driving licence details etc. After that, government officials will analyse that data secretly, and put D, which means doubtful, in front of the name of some people. This means they are doubtful citizens, and officials will mark this if people were not able to provide correct details like the birthplace of their parents, Aadhaar card etc, he alleges.

Yogendra Yadav says that after this, people with D with their name will start getting letters from the government, asking to prove their citizenship. He says that the government has not told us till now how to prove citizenship, and we only have the example of Assam where NRC process has been completed. In Assam, documents like Aadhaar Card, Ration Card, having the name in Voter List etc were not accepted as proofs of citizenship. He said that people of Assam were asked to bring proof where they were born. After this, he says that who can’t submit proofs, their cases will be sent to Foreigners Tribunal. This will be their last resort to prove their citizenship. If a person is Muslim, then they have no way, as they are not included in CAA. He says that even for Muslims, they will have to prove that they came from Pakistan, Bangladesh and Afghanistan, while the fact is that they are living in India for 500-1000 years. Those who can’t prove citizenship in Foreigners Tribunal will be declared foreigners and they will be sent to detention centres; Yadav concludes his fearmongering. He said that govt of India has made rules regarding detention centres, such centres are operating in Assam and are being built in other states.

The Swaraj India party leader said that Census, NPR, NRC, Foreigners Tribunal and Detention Centres are five fingers of evil, and people should oppose the first finger, the census, so that the remaining ones do not arise. He asked people to not give data to census enumerators and boycott the NPR. ‘Do not let any information about you to be written on paper, else situation will be out of your control’, he warned.

Yogendra Yadav has scripted a nice horror story staring from census to detention centres, but everything he said was a lie. He mixed-up completely unrelated details to fearmonger about the government initiatives, some of which are being done from past.

Read- ‘When UPA does the NPR, it is okay. When we do it, we are questioned. What is this?’ Amit Shah

First, the census and NPR are based on residency, it has nothing to do with citizenship. In this exercise, data from people living in India is collected, it does not differentiate between citizens and resident non-citizens. Therefore, it is simply not possible to identify someone as a doubtful citizen based on NPR data. The NPR was first prepared in 2010 during the UPA government, and there is no report of any citizen marked as doubtful based on this data. Just because someone can’t provide Aadhaar details or birthplace of parents, they can’t be declared doubtful citizens.

Yogendra Yadav seems to have borrowed the concept of marking D from Assam, when voter lists are published with persons marked as D against their name. These persons were named in the voter list, but could not prove their nationality during an intensive door-to-door survey by poll officials. D voters are barred from voting in elections, and their cases were referred to Foreigners Tribunals. It is very important to note that only Indian citizens are authorised to vote, and hence people with doubtful nationality can’t vote in India. But as the census and NPR are based on residency and not on citizenship, there is no questions of marking doubtful in that exercise, and therefore there is no question of sending anyone letter to prove citizenship under NRC using NPR data.

While Yogendra Yadav tries to line NRC with NPR, the fact is they are totally different, as one is regarding citizenship and the other is about residency. He also gave wrong information about recently concluded exercise in Assam to update the NRC. The root of updating the NRC in Assam lies in the Assam Accord signed by Rajiv Gandhi government in 1985. It had said that all illegal foreigners that came to Assam after 1971 will be detected and deported. To fulfil that objective, the original NRC which was published in 1951 was updated. During this exercise, the 1951 NRC, and voter lists in the state up to the year 1971 were made public, known as legacy data, and citizens had to locate their or their parents/grandparents etc names in those documents. Once name any of the family members were located in the legacy data, other members in the family could use various types of documents to prove a link with the person. A long list of official documents was acceptable to prove this linkage, including ration cards, birth certificates, school certificates etc.

Voter lists after 1971 were not considered, even if a person’s name was mentioned in such lists. This is because, the 6-year long agitation in Assam demanding deportation of illegal immigrants, that had ended with signing the Assam Accord, had started after names of a large number of illegal immigrants were found included in voter lists. As the ultimate goal of update the NRC was to remove illegal immigrants, such lists can’t be basis of proving citizenship, at least in Assam.

Read- Assam’s NRC: All that the media doesn’t tell you

Assam has 100 Foreigners Tribunals, and 36 of them were set up before 2014. 64 additional tribunals were set up as per a Supreme Court order in 2014. Similarly, detention centres were set up in Assam in 2008, when the Congress party was in power both in the state and in the centre.

Yogendra Yadav keeps talking about Aadhaar card in the video, which proves that he has no idea about this document. Aadhaar is not a proof of citizenship, it is just a proof of identity. It proves that a person is really that person that he/she is claiming to be. Having Aadhaar is no proof that one is an Indian citizen, as foreigners living in India are eligible to obtain it legally.

NRC was updated in Assam due to massive agitation against illegal foreigners and the Assam Accord, and Assam has a different cut-off date for determining citizenship, which is March 25 1971. Therefore, the process used in Assam for NRC can’t be used at the national level. The union government has repeatedly said that there is no proposal to bring NRC at national level at present, therefore, it is not known what will be its shape and terms and conditions if and when it is implemented. To say that NRC will be based on NPR data is baseless, and it is only needless fearmongering that Yogendra Yadav is indulging into.

By calling for not giving information during the census, Yogendra Yadav is making a dangerous appeal which has the potential to derail welfare schemes of the government. The census data is very important to know the socio-economic and other statuses of people in the country, based on which various welfare schemes are formulated. If the government does not have the latest correct data, such schemes can’t be targetted properly. Therefore, it will be an anti-poor move if the census is boycotted as per Yogendra Yadav’s appeal.