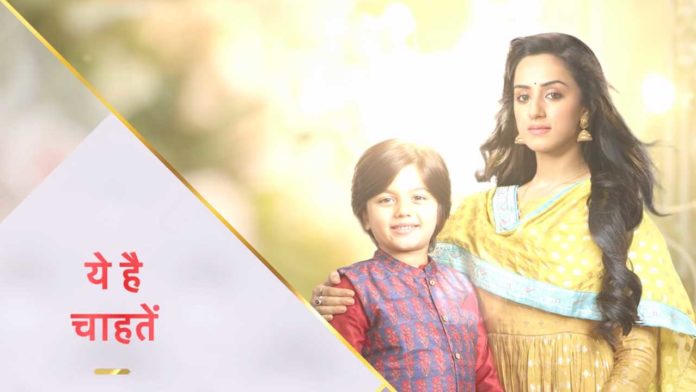 The episode begins with Mishika and Ahana talking that all these videos are just a way for them to show off their designer dresses just then they hear Preesha scream Saaransh’s’ name followed by Rudra. Ahana says she will teach Preesha a lesson and begins to leave when the door is opened by Sharada. Ahana asks her why she is crying? She tells them that Saransh is missing and asks them if they have seen if, they say no and she leaves. Ahana and Mishika decide to go and witness the drama. Sharada tells Preesha and Rudra that Saransh is not in Ahana’s room and starts blaming herself for leaving him alone and involving in his game. Rudra tells her its not her fault and that they will find him. Preesha leaves from there and Rudra follows her, she says he might have gone to her parents’ house and she should go there. Rudra stops her from leaving she begins to argue with him and faints.

Vasudha keeps calling G.P.S but his phone is switched off just then the door bell rings and she answers the door. Two people from her society tell her they want to show her a message a from G.P.S which reads as “Mr. Sharma I have deposited 5 lakhs in society bank account and will deposit the remaining 5 lakhs soon.” She questions them what money are they talking about. They tell her G.P.S had withdrawn 10 lakhs from society bank account and someone snatched the bag from his hands. He had filed a police complaint but they failed in retrieving the money. They also add that they want the remaining 5 lakhs soon or a case will be filed.

Rudra carries an unconscious Preesha to the hall, where Niketan asks Rudra to carry Preesha to his and that he would call the doctor. Niketan asks Ahana and Mishika to prepare lemon juice for Preesha. They joke among themselves about adding poison to the lemon juice. Preesha regains consciousness and asks if they have found Saransh, Rudra replies no. She decides to call her amma and find out if Saransh is there. She calls and Vasudha if Saransh is there, Vasudha in turn asks if G.P.S is there. Preesha tells Vasudha that Saransh is missing and Vasudha decides not to tell Preesha about G.P.S. Preesha informs them that Saransh is not at her amma’s house, Rudra decides to go to the police. Niketan then adds that he will call the commissioner of police to the house itself.

Vasudha leaves a voice message for G.P.S asking him where he is? She also adds that she knows about the society money being stolen and him pawning her necklace for 5 lakhs. She asks him to come home soon and they will together repay the other 5 lakhs.
The police man questions the family if Saransh was at home until evening, Rudra says yes. The police man then asks if anyone else has entered the house Preesha says no. the police declare that it is a case of abduction. Niketan questions why would anyone kidnap Saransh and receives a reply saying for money, they might receive a call demanding ransom. Niketan informs the police man that they have not received any such calls. Preesha questions if there is any other reason for kidnapping him, the police man says that it might be done by someone who does not like them or wants to separate them. Rudra says there is no one like that and the police says they will start the search for Saransh and asks them to send a picture of Saransh which Preesha does.

Balraj comes there and asks them what is going on, Rudra says that Saransh is missing. Balraj reprimands Preesha saying instead of spending her time meddling in family affairs she should concentrate on her child, and that he is an attention seeker and always wants everyone to attend him. Preesha refuses his allegations saying he does not seek attention from anyone and he asks his mother if he wants anything, she also warns Balraj to think before speaking about Saransh and asks him not to question her upbringing.

Sharada asks Balraj if he had seen Saransh when he had gone to room earlier. He says no and adds that he had not gone to room, he directly went to the guestroom as he had a meeting and took some rest there. Balraj then says that it is good the child is missing and wishes to god that he is never found again, while proclaiming that the house will be peaceful without him. Rudra gets angry and asks his father not to say such things about Saransh otherwise…. this enrages Balraj who screams at Rudra for speaking to him this way and is about to raise his hand on him but is stooped by Niketan. They all leave and Preesha and Rudra are left alone, Rudra apologizes to Preesha for his father’s words. Preesha asks him not to apologies and adds that it is good to see that someone along with her is standing up for Saransh.

Preesha is asleep and mumbles about Saransh she wakes up haring his voice and finds him standing before her, she begins to reach out but he disappears she calls out his name. Rudra comes there and consoles her saying it was her mind making her see what her hearts to see. She begins to cry and tells Rudra that she wants her child and that she will die without him. He soothes her. Sharada comes there and tells them she has to say something which will help them in finding Saransh. Rudra asks her to tell him so they can find Saransh. She reminds them the words the police had said earlier and says it is likely that his father has kidnapped Saransh. Preesha looks on disbelievingly while Rudra tells her how his father beat him when he was a child till his skin was torn and until he collapsed from the beating. He vows that Saransh will not live a childhood filled with fear like he had.

The precap shows Sharada informing Preesha and Rudra that Balraj is not in the house and Rudra then declares that it is Balraj who has kidnapped Saransh. Elsewhere Balraj thinks to himself that he is in a place from where he can remain unseen but can control everything, he further adds that the first step is done and now he has to purchase some clothes for the child. Saransh is in a store room and screams for Rudra to save him while a lady clad in red saree opens the door. Preesha and Rudra lookup Balraj’s browsing history and find he purchased children’s clothes. Preesha informs Rudra it is the same site from which she purchases clothes for Saransh, Rudra then declares that Balraj has purchased clothes for Saransh.