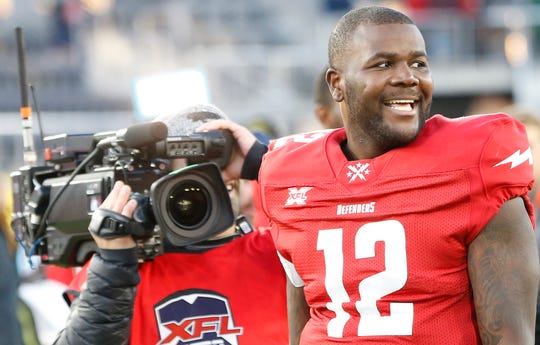 The inaugural weekend of the XFL reboot has wrapped up.

There will be much that the league will want to learn from as it tries to grow and become a viable spring professional football league to compete with and flourish alongside the NFL. All eight teams in the league played this weekend with two games Saturday and two Sunday. The D.C. Defenders, Houston Roughnecks, New York Guardians and St. Louis BattleHawks each won their games.

That means the Seattle Dragons, Los Angeles Wildcats, Tampa Bay Vipers and Dallas Renegades will have nine more chances in the regular season to turn things around before the playoffs.

But before that, here are the winners and losers of the inaugural weekend.

According to numbers released by ABC, the kickoff game between the Dragons and the Defenders drew an average of 3.3 million viewers. Perhaps an even better sign for the league and for the network partners – ABC/ESPN and Fox – was that the kickoff audience peaked with an audience of 4.0 million at the end of the broadcast, an indication that viewers stayed interested throughout the game. The now-defunct AAF had similarly high numbers for its opening kickoff weekend. Now it’s on the XFL to give fans a reason to stay.

The @xfl2020 on ESPN/ABC is off to a strong start! pic.twitter.com/ZjAzmTLmz9

P.J. WALKER: Meet the QB who starred in XFL debut

NEWSLETTER: Sign up now to get football news delivered to your inbox

No star emerged brighter from the XFL’s opening weekend than Roughnecks quarterback P.J. Walker. Just 24, Walker completed 23 of 39 passes for 272 yards with four touchdowns and one interception. He also scored on a two-point conversion that he ran in. Walker flashed athleticism to improvise and extend plays, scrambled out of the pocket and strafed the Wildcats’ defense with intermediate and deep passes.

PJ Walker threw for 4 TDs and got the dub pic.twitter.com/YH8mBBUSpd

Minutes before kickoff in the Guardians game at MetLife Stadium, two fans waited in line at a concession stand. “Didn’t you say this would be a high-scoring league?” a woman with a New York Giants knitted hat asked her friend. “Take the over.” Her friend looked at her, paused and contemplated. He then punched a few buttons on his smartphone screen and appeared to take her advice. “Yeah, what the hell,” he said. That’s one segment of fans the XFL is looking to capitalize on. With online sportsbooks readily accessible on smartphones, the league has embraced sports gambling, even listing live money lines on broadcasts and allowing broadcasters to discuss them. Acknowledging the existence and growing popularity of sports gambling should not only help the league make inroads with a potential new fan base, it gives those interested in wagering a league that is open and transparent about the industry’s existence.

It’s probably no surprise that the XFL picked four of its biggest markets for home games. The league was likely looking for robust attendance numbers to set the tone and kick off the inaugural weekend on a strong note. Fans in each market delivered remarkably consistent results. Houston (17,815) led the group, followed by New York (17,634), Dallas (17,206) and Washington, D.C. (17,163). The crowds were enthusiastic and passionate and provided a steady backdrop that elevated the atmosphere, whether in person or on broadcasts. The XFL has the advantage of strong financial backing and a healthy television deal. But for the league to remain viable, it will need to grow or, at the very least, maintain its attendance figures.

With football fans eagerly watching and curious to see what the XFL would offer, the Saturday slate – even though both games ended up being decided by double digits – provided scoring and some star performances. Both games averaged 52 points in combined scoring and offered viewers a glimpse of the quirks of the game. Above all else, some strong quarterback play from Walker and Cardale Jones of the Defenders helped keep engagement throughout the day.

Though the games were compelling in their own ways, Sunday was a different story. The Vipers scored three points in their loss. The Renegades scored nine in theirs. Sunday’s games averaged just 25 combined points. The prime-time game on Sunday, the last of the weekend, was the lowest scoring, though it was the closest.

Only one squad playing away from its home stadium, the Battlehawks, won.

One unique and interesting feature the XFL provides is for coaches to be aggressive and go for three-point conversions after touchdowns. It requires the scoring team to get into the end zone again, in one play, from the 10-yard line. Coaches remained conservative and didn’t attempt one three-point conversion. That’s likely because the games weren’t very close and coaches are probably saving their best-performing 10-yard plays for when they’ll need to make up a deficit. Still, coaches shedding some of that conservatism would likely inject more enthusiasm into the product.

He was supposed to be one of the premier quarterbacks in the league. But Murray had an underwhelming opener in which the Vipers lost 23-3 to the Guardians in which Murray spent stretches on the sideline watching backup and change-of-pace dual-threat quarterback Quinton Flowers. Murray completed just 16 of 34 passes for 231 yards with no touchdowns and two interceptions. Tampa Bay’s offense moved the ball well at times, but Murray sprayed passes all over and just could not make enough throws to sustain drives. Murray struggled last year in the AAF and this, unfortunately for him, looked like more of the same. Flowers didn’t get much time under center, but judging by the calls from Vipers fans on Tampa Bay Twitter, that might soon be changing.