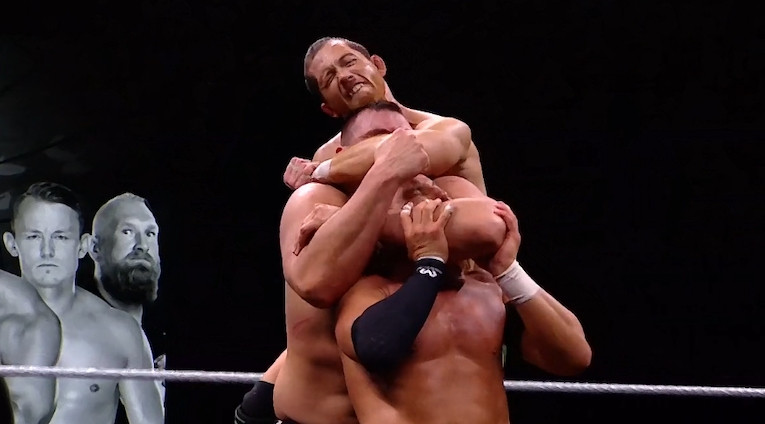 – Cathy Kelley interviewed the Grizzled Young Veterans and the Broserweights in the crowd, announcing that the winners of the Dusty Rhodes Tag Team Classic will move on to NXT TakeOver: Portland to challenge for the NXT Tag Team Championship.

– New North American Champion Keith Lee was seen in the crowd, as well as Chelsea Green and her manager, Robert Stone.

– Recent NXT signee Mercedes Martinez was in the crowd, as well as upcoming NXT Women’s Championship challenger Bianca Belair. Dakota Kai was also shown, and Tegan Nox attacked her from behid. The two brawled, including Nox tackling Kai through the ringside barricade, until security pulled them apart.

– Finn Bálor attacked Johnny Gargano during a backstage interview. Trent Seven and Tyler Bate broke it up, with Bálor having words with Bate.

6. Imperium defeated Undisputed Era. Alexander Wolfe was injured early on when a kick from Bobby Fish appeared to connect with his jaw and knock him out. This left Imperium at a 4-to-3 disadvantage. Roderick Strong put WALTER through the announce table with an Olympic slam to temporarily take him out as well, but the big man returned and was able to pin Fish after a powerbomb.