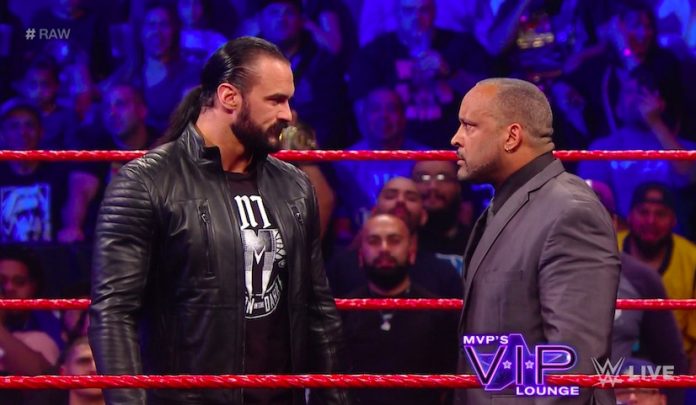 Here are your quick and dirty, editorial-free WWE Raw results for February 10, 2020. The show featured a Raw Women’s Championship match with a bloody post-match attack, an eight-man tag team match, and more. Make sure you’re here tomorrow for the complete Best and Worst of Raw column.

– Seth Rollins, along with (Buddy) Murphy and AOP, opened the show with a promo. They were interrupted by Kevin Owens, who brought out the Viking Raiders. The trio brawled with Murphy and AOP, leaving Rollins alone in the ring for a sneak attack from Samoa Joe. This was to set up the already announced eight-man tag team main event.

1. Raw Women’s Championship Match: Becky Lynch (c) defeated Asuka. Lynch pinned Asuka after a Rock Bottom (or a Manhandle Slam without the “handle”). After the match, Shayna Baszler attacked Lynch and bit her in the neck. Baszler’s face was covered in blood, and an injured Lynch was checked on by EMTs. They led Lynch through the backstage area toward an ambulance to take her to get medical care, but Lynch pushed them down and drove the ambulance away herself. You can watch a clip of the bite attack here.

2. The Street Profits defeated Mojo Rawley and Riddick Moss with a spinebuster to Moss, followed by a frog splash. Rawley checked on Moss after the match, so Moss rolled him up and won the 24/7 Championship.

– Drew McIntyre was a guest on MVP’s “VIP Lounge” talk show segment. MVP tried to convince McIntyre to let him be his agent, or advocate. McIntyre turned him down, so MVP got physical, grabbing McIntyre’s arm. This led to him getting Claymore Kicked. McIntyre then made fun of MVP’s “ballin” taunt.

3. Angel Garza defeated Cedric Alexander. Humberto Carrillo charged and attacked Garza before the match. Once that was under control, Garza was able to defeat Alexander with the Wing Clipper.

4. Rhea Ripley squashed Sarah Logan. Charlotte Flair watched from the stage. After the match, Ripley asked Flair if she had an answer for her WrestleMania challenge. Flair didn’t.

– Randy Orton said that attacking and injuring Edge hurt him more than it hurt Edge. He was interrupted by Matt Hardy, who spoke passionately about his complicated relationship with Edge and demanded to know what was wrong with Orton. Orton tried to RKO Hardy, but Hardy reversed it. Orton connected with his second RKO attempt, and then gave Hardy the one-man conchairto.

– Ruby Riott says that Liv Morgan used to be her best friend, and that she knows the real Liv Morgan.

6. Aleister Black defeated Akira Tozawa with Black Mass. After the match, Black sat down in the ring and paraphrased Alan Moore.

– Becky Lynch returned to the arena and threatened to get revenge by breaking Shayna Baszler down week by week.

7. Seth Rollins, Buddy Murphy, and AOP defeated Kevin Owens, Samoa Joe, and The Viking Raiders. Joe tapped out Murphy in the Coquina Clutch, but the referee was distracted. Rollins Curb Stomped Joe, and Murphy pinned Joe to win the match.