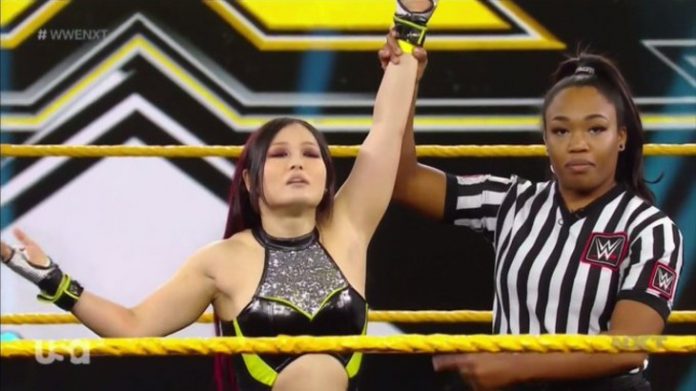 Here are your quick, editorial-free WWE NXT results for March 25, 2020. After a clip show week with no new matches, NXT returned with qualifying matches for the upcoming women’s ladder match, Matt Riddle vs. Roderick Strong, and more. Make sure you’re back here tomorrow for the complete Best and Worst of NXT episode review.

1. Tyler Breeze defeated Austin Theory. Theory got overconfident and starting filming himself cutting a promo during the match, which allowed Breeze to hit the Beauty Shot for the win.

– After Aliyah entered the ring for her match with Xia Li, Li was shown crying and injured backstage. Aliyah looked like she expected to get a win and a slot in the ladder match to determine the number one contender for the NXT Women’s Championship, but instead, she had a new opponent, a returning Io Shirai.

– Dominik Dijakovic interrupted an in-ring interview with Keith Lee to challenge for the North American Championship. Damian Priest interrupted them to deliver his own challenge. The three men brawled, with Dijakovic coming out on top.

– In a pre-recorded video taken while on vacation, Adam Cole said he wouldn’t give The Velveteen Dream a shot at the NXT Championship, but he would give him a match with Bobby Fish.

6. Candice LeRae defeated Kayden Carter, tapping her out with Gargano Escape to earn a spot in the ladder match.

– Two large men in matching gear attacked Riddle after the match. Malcolm Bivens entered the venue. He introduced himself (noting he and Riddle already knew each other) and introduced Riddle to, “the future of the NXT tag team division.” The large men posed and they and Bivens stood over Riddle as the show cut to a commercial break.

– Triple H started to introduce his segment with Johnny Gargano and Tomasso Ciampa, saying they have the greatest rivalry in the history of NXT, but he was interrupted by Ciampa, then Gargano. HHH said he stopped William Regal from firing both of them after their fight in the PC. He said their rivalry “should end on the biggest stage that there is,” but Gargano argued all they needed was a ring and a referee. Triple H said he would “find an empty building,” put a ring in it, and get a referee. He added that if their feud doesn’t really end with this match, both Gargano and Ciampa will have to leave NXT. Gargano said he would be ready for the match in two weeks.

– The show ended after HHH, Gargano, and Ciampa were interrupted by a mysterious vignette hyping the impending arrival of Killer Kross.