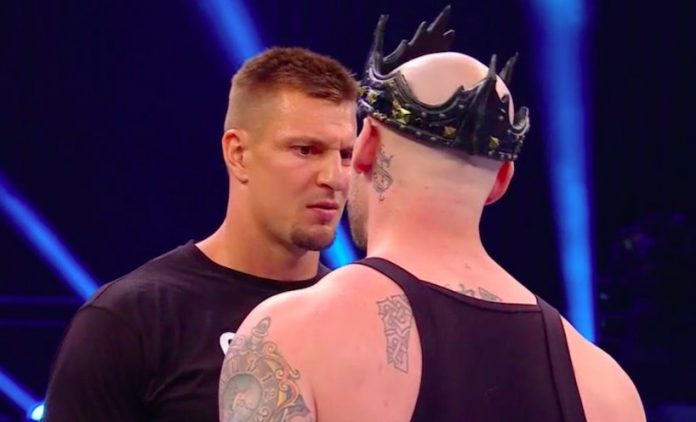 – Michael Cole and Mojo Rawley introduced Rob Gronkowski, who awkwardly danced to the ring. Gronk was interrupted by King Corbin, who explained to him that the NFL and WWE are different. Elias interrupted to sing another song about Corbin, and Gronk pushed Corbin down. Gronk then made Corbin vs. Elias for WrestleMania.

1. Daniel Bryan and Drew Gulak defeated Cesaro and Shinsuke Nakamura. The Cesaro, Nakamura, and Zayn group is now known as the “Artists Collective.” Bryan pinned Cesaro with a sunset flip despite not being the legal man. After the match, Bryan challenged Zayn to an Intercontinental Championship match at WrestleMania. Zayn said he’d agree if Gulak could defeat Shinsuke Nakamura next week.

– Paige called in via Skype, but was interrupted by Sasha Banks and Bayley. They made fun of Paige for her career being over, and Paige announced that Bayley will face Lacey Evans, Dana Brooke, Tamina, Naomi, and Sasha Banks in a Smackdown Women’s Championship Six Pack Challenge at WrestleMania.

– Bray Wyatt vs. John Cena from WrestleMania 30 was shown in its entirety. Cena wins, LOL.

– Alexa Bliss and Nikki Cross were interviewed backstage, and Bliss challenged Asuka to a match for next week.

2. Smackdown Tag Team Championship Match: The Miz and John Morrison (c) defeated Heavy Machiner.Before the match, Miz and Morrison hosted The Dirt Sheet and dressed up as the New Day, the Usos, and Heavy Machinery to make fun of them. Dolph Ziggler was on commentary, and taunted Otis with Instagram photos of Ziggler with Mandy Rose. Otis became enraged, attacked everyone, and hit Miz and Morrison with a steel chair to get disqualified.

– Next week The Usos wrestle The New Day, with the winners challenging for the Smackdown Tag Team Championship at WrestleMania.

– Roman Reigns and Goldberg had a contract signing for their match at WrestleMania. They stared at each other.