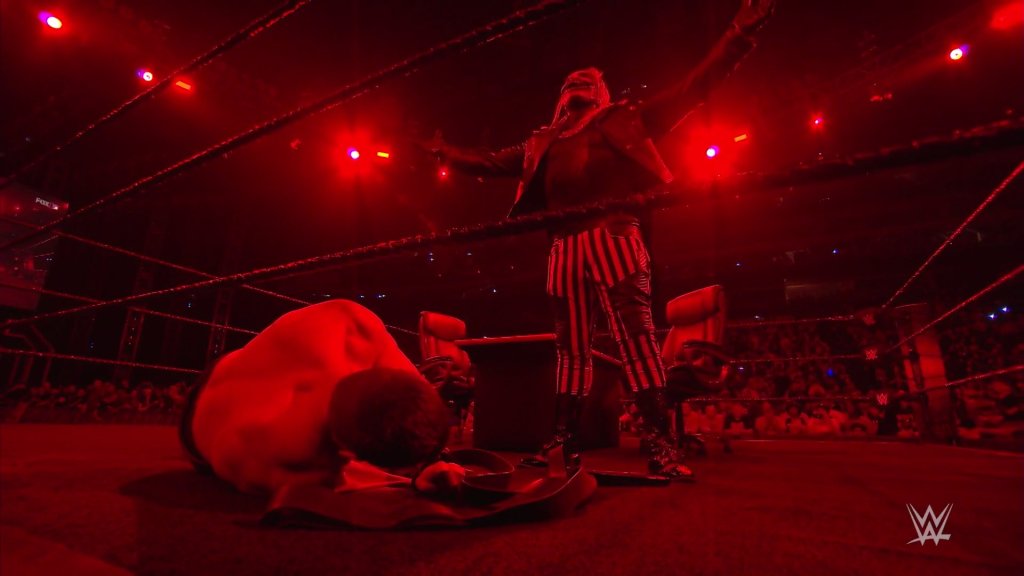 1. Roman Reigns and The Usos defeated King Corbin, Dolph Ziggler, and Robert Roode. Jimmy Uso was thrown into the ring steps and post during the match, injuring him and causing him to get taken to the back. Jimmy would return later and hit a top rope splash to win the match for his team.

– Lacey Evans was interviewed about her upcoming title match at Royal Rumble. Bayley attacked her from behind until referees pulled her off of Evans. The two continued to brawl through the backstage area, interrupting a Carmella and Dana Brooke interview. Evans attacked Bayley with a shoe.

2. Alexa Bliss and Nikki Cross vs. Fire and Desire was a No Contest when the Bayley/Evans brawl found its way to the ring.

3. Braun Strowman and Elias defeated Cesaro and Shinsuke Nakamura. Strowman hit a powerslam on Cesaro, allowing Elias to drop a top rope elbow on Cesaro and win the match.

– Big E revealed his strategy for the Royal Rumble: get extremely oiled up so nobody can throw him out.

4. John Morrison defeated Kofi Kingston. Before the match, Morrison and Miz both declared for the Royal Rumble. Big E attempted to keep Miz from getting involved in the match, culminating with Kingston hitting a Trouble in Paradise on Miz to knock him off the apron. Morrison capitalized on the distraction and hit Starship Pain to win the match.

– Daniel Bryan came to the ring for the contract signing for his Universal Championship strap match against Bray Wyatt at Royal Rumble. Instead of coming to the ring, Wyatt appeared on the TitanTron and said he was trying to fax in his part of the contract. Ultimately, Wyatt said that he wasn’t fighting Bryan at Royal Rumble, the Fiend is. The Fiend teleported into the ring, attacked and whipped Bryan, and signed the contract in blood after repeatedly stabbing the pen into his own hand.