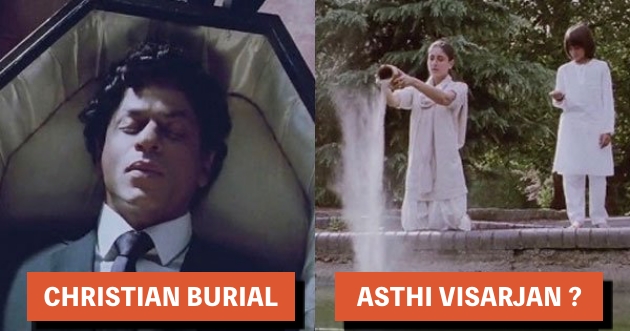 Bollywood is hometown of extravagant entertainment packed with tons of action, drama, romance, thrills, and much more. We’ve seen tons of superhits blockbusters in the industry but, from time to time, even the big box-office hits tend to have some glitches. However, to err is human and even Bollywood films tent to make some mistakes sometimes.

You may think that your favorite movies would not have such goof-ups. Well, prepare to be shocked then! Here is a list of top 10 mistakes in Bollywood movies we are pretty sure you would not have noticed.

1- The movie Lagaan is set in 1892. A little research showed that in those days, England allowed only 5 balls per over but in the movie each team got 6 balls. Talk about a movie being ahead of its time!

2- In the movie Krrish, Hrithik Roshan’s character is shown in Singapore for two years. Back home in India, his mom Rekha breaks the news of his wife’s pregnancy to him over the phone. We wonder how the ‘supermom’ Nisha managed to be pregnant for two full years! I’m guessing either Nisha was cheating on Rohit or may be Jadoo was at play here too!

3- Bhaag Milkha Bhaag which is set in the 50s, Farhan Akhtar serenades Sonam Kapoor with the song Nanha Munha which actually released in 1962.

4-  There is no Pakistani Embassy in Bruges. There is one in Brussels though! So was Sarfaraz jobless or was he lying? Tapasvi Maharaj did ask Jaggu not to trust him!

5- In PK, Sanjay Dutt comes to Delhi via train number 12290. That’s the Duronto Express that runs between Mumbai and Nagpur. Moreover, Kalyan is clearly written on the train.

6- In Ra.One, Shah Rukh Khan is given a Christian funeral despite being a South Indian Hindu.

But later Kareena Kapoor is seen immersing his ashes into the river.

7- In Chennai Express, Shah Rukh’s grandfather dies in the movie and he’s shown taking his ashes.

But later, there’s a scene where his grandmother hands him his grandfather’s ashes, again!

8- In Gunda, Mithun dodges bullets behind a bicycle.

9- We loved Pyaar Ka Punchnama, for its honest and relatable humour but none of us noticed this silly mistake. Remember when the three friends go to a dhaba for dinner?

They are shown arriving on a bike but they leave in a jeep! How did that happen Mr.Luv?

But in the next scene, Katrina is sporting a maroon top when she finally meets him. Did Katrina change her clothes on the way while riding to catch up with the guys who had just left?

11- In Yeh Jawani Hai Deewani, before the duo boards the train, Ranbir Kapoor takes Deepika Padukone’s luggage and her book.

But DP is still carrying the book in the very next scene!

12- In 3 Idiots, during the climax scene (Neha and Suhas’s wedding) Suhas is first shown to be inside the wedding venue.

However, in the following scene he makes an entry through the main entrance gate of the venue. Did he time travel?

13- In Kai Po Che, people are watching news about the Gujarat riots on Headlines Today. The riots happened in 2002 and Headlines Today was launched on April 7, 2003.

14- In Heyy Baby, a bigger flaw than the movie itself was the colour of the baby’s clothes in the background. First it’s blue.

And then again it’s back to blue.

15- In Badlapur, when Raghu goes to meet Harman, there are some musicians playing on his right.

But when the inspector watches the CCTV footage of that night, the musicians are missing from the footage.

16- In Badlapur, there are wine stains all over the wall and the painting when Raghu throws a wine bottle at Harman’s place.

However, a second later, there are no stains.

17- In OMG! there’s a scene where a news channel is being shown broadcasting, there is a logo goof-up! On the TV screen we see the new ‘ABP News’ logo.

But the mic being held by a reporter of the channel depicts the old ‘Star News’ logo. Cost cutting maybe?

18- Even Queen Make Mistakes. We just caught her Red Handed with this Blunder. We see the mobile is in the middle of the bed when Kangana is standing.

But as soon as she jumps on the bed, the position of the phone changes.

19- In Baby, when Akshay is chasing Wasim Khan, he starts off the chase in a Land Crusier.

But when he gets off from the car after the chase, the car has changed to another one!

20- In Dum Laga ke Haisha, we see Prem’s family in a blue coloured Maruti Omni van on their way to meet Sandhya.

But midway, the van changes to this…

21- In Aashiqui 2, when Rahul is talking to a guy off-stage, we can see 3 boys in the background.

But at the same time, those 3 boys are also on the stage with Arohi.

Whatever the case may be, we do still hold these movies close to our hearts and the fact that they were a ‘hit’ only prove that we liked them!