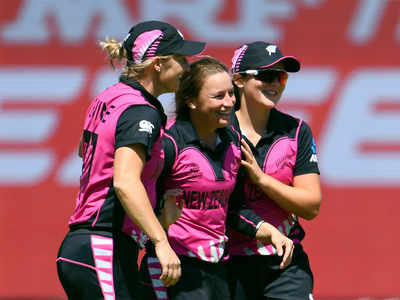 The White Ferns were left at a spot of bother having been bowled out for 91 in 18.2 overs but their bowlers produced a stunning display to dismiss Bangladesh 17 runs short of the target in the first meeting between the teams.

Ritu Moni’s (4/18) first four-wicket haul, the best figures of the tournament so far, was not enough to steer Bangladesh to a historic victory.

Bangladesh battled in the modest chase but were dismissed for 74.  Bangladesh kept things tight before Rachel Priest found her feet to steer New Zealand to 33 without loss after they chose to bat.

Captain Salma Khatun stepped in to halt the flow by removing Sophie Devine for 12, Fahima Khatun taking the catch at backward point.

Suzie Bates helped New Zealand find rhythm but she soon fell when bowled by Ritu for 15.

Bangladesh’s bowling brilliance continued as Maddy Green was stumped by Nigar Sultana Joty off Rumana Ahmed before they claimed their second scalp in as many balls when Jensen was run out backing up.

Ritu ended her stint with the first four-wicket haul Bangladesh have taken in the World Cup and Rumana took her second when Kasperek was stumped for two.

It was only the third time the White Ferns had been kept under 100 runs at a World Cup but it was clear they weren’t going to go down without a fight as Jensen (3/11) and Kasperek (3/23) made amends.

Bangladesh soon had batting woes of their own, Kasperek dealing with Murshida Khatun (11) while Ayasha Rahman was caught by Devine at mid-off off Jensen.

Held at 32/3 at the midway point, Bangladesh’s eagerness to lower the required rate proved costly as Fargana Hoque and Ritu Moni were both run-out.

Jensen took her second scalp when she trapped Rumana lbw for one before Bates caught Sobhana Mostaray for seven at mid-on off Devine.

The win for New Zealand means Group A is perfectly set-up for a final showdown, with a Trans-Tasman match on Monday seeing them face Australia on Monday, with the winner set to reach the semi-finals.