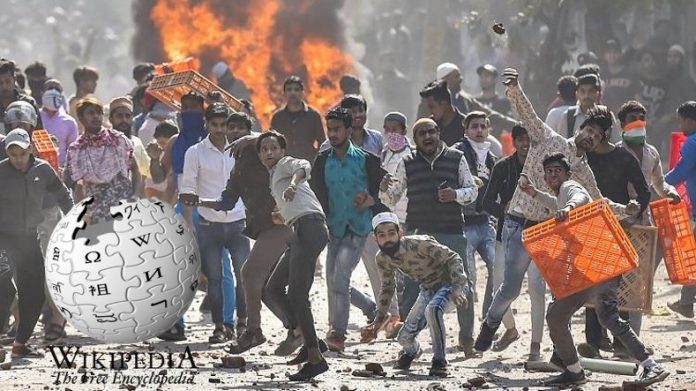 As the North East Delhi continues to be under the grip of violence on the issue of Citizenship Amendment Act, a concerted effort has been taken by a section of media and left-liberal users on social media to portray the pro-CAA protestors and Hindus as the perpetrators of the riots. While both sides have indulged in violence and there is ample evidence of violence by Muslims and anti-CCA protesters, they are sought to be brushed aside and highlight only the violence by pro-CAA crowd. One of the most prominent examples of the same is a page on Wikipedia dedicated to the riots in North East Delhi this week, which is very obviously biased, where the moderators are actively removing content that shows the involvement of anti-CAA crowd in the riots.

The Wikipedia article titled North East Delhi riots was created on Tuesday by a senior Wikipedia editor that hoes by the username DBigXray. When one visits the page, the first image one sees is the photo of BJP leader Kapil Mishra, not an image of the riots. Kapil Mishra gets a separate section titled ‘incitement’ in the article, where he has been blamed for starting the riots.

The BJP leader had only talked about hitting the streets, he didn’t issue any threat of violence. Hitting the streets usually means marching on the roads demanding or protesting against something, it does not automatically imply a threat for violence. Several editors on Wikipedia had asked to remove the Kapil Mishra’s photo from the article as he is not directly involved in the riots, and not proven guilty of any violence. But the senior editors, who have more rights then normal editors like preventing normal users from making edits in specific articles, overruled them, saying that he is the central figure in the riots. Being regular active users, senior users also develop personal coordination with Wikipedia administrators, who can block users from making edits in the website.

Interestingly, some people had reference to AAP leader Amanatullah Khan for his provocative speeches during anti-CAA riots earlier in Delhi and UP. But this was also removed by the moderators, claiming that although cases have been filed against Khan, those are not related to the North East Delhi riots.

On 24th, one anti-CAA protester had brandished a pistol and fired 8 shots towards pro-CAA protesters, who was identified as Mohammad Shahrukh. The Wiki page merely mentions him as a shooter, and does not even mention that he is from anti-CAA mob.

After the image of the Shahrukh firing had gone viral, anti-CAA activists had claimed he is pro-CAA, despite on the ground journalists who had posted the videos and images saying he was anti-CAA. Later high-resolution images had shown he was part of a mob which had several persons in skull caps. When other users wanted to include this information in the Wikipedia article, they were shot down by the moderator. The senior editor, who is supposed to be politically neutral while editing and moderating content on Wikipedia, commented that if the man was a Hindu, media would not have focused on him, and there is no need to include more detail on the incident.

The article mentions the attack on a mosque in Ashok Nagar and shouting of “Jai Shri Ram” and “Hinduon ka Hindustan” slogans by the mobs, but have absolutely no reference to any attack by Muslims and anti-CAA mobs. On the other hand, while there are videos showing mob shouting “Nara e Taqbeer” and “Allahu Akbar”, but they find no place on the page.

The Wikipedia page mentions journalists heckled by Hindu Sena, right-wing protesters and other Pro-CAA mobs, but does not mention a single incident of journalists attacked by Muslims and anti-CAA mobs. Reports of attacks on journalists by sides of the rioters have emerged, but the Wiki page, which is being actively moderated by the user DBigXray portrays only Hindus and pro-CAA crowd as violent. Anti-CAA mob had thrown acid on paramilitary forces, but that is not mentioned in the article, despite other users messaging the moderator to include it with media report link.

Although Wikipedia articles can be edited by anybody, the online encyclopaedia has provision for locking down specific articles to check vandalism etc. The article on North East Delhi riots has been made semi-protected, which means only confirmed registered users can make edits to it. As a result, ordinary users are having to request user DBigXray for making changes, and user DBigXray, who has special privileges as a Master Editor III, decides which contents are included and which are not in the page.

For example, when one user requested the moderator to include the news of murder of a Hindu activist by Muslims, the moderator declined the request, saying the request is not clear. When another use pointed out that the violence is happening from both the sides and not only from Hindu and pro-CAA side, the moderator refused to agree, asking to provide reliable sources for the claiming, despite the fact that users had already posted media report links on riots by Muslims and anti-CAA mobs. The moderator even refused to include the provocative comments by AIMIM leader Waris Pathan, again asking for ‘reliable source’, for a comment that has been in the headline for a week now.

It is always known that History shows the biased view of the writer. And as Historians tend to be from left-wing ideology, History also reflects that. The current Wikipedia article on the Delhi riots is a living example of the same. Despite evidence of riots from both sides, the article mentions only violence by pro-CAA and Hindus, while for violence by anti-CAA and Muslims, nobody responsible is mentioned, thereby presenting a completely biased view of the riots.