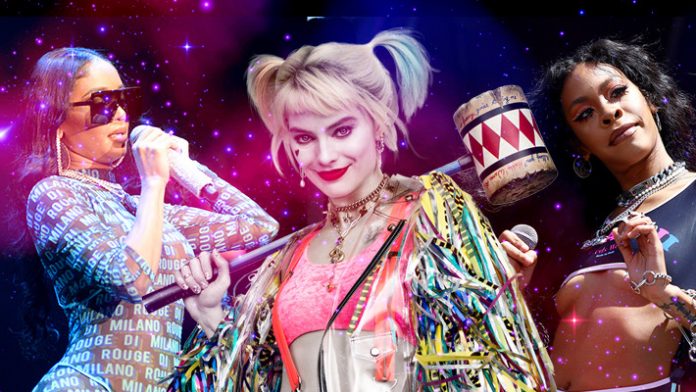 After a year in which the latest Joker film polarized audiences with its gritty take on the iconic comic book character, DC’s new film featuring its other clownish antihero is now causing controversy — albeit of a different variety. On Friday, Atlantic Records released the third single from the soundtrack of the upcoming, Harley Quinn-starring Birds Of Prey film along with its dazzling video featuring clips from the film, but fans were nowhere near as pleased with the new clip as they’ve been with other aspects of the movie’s promotion.

The “Sway With Me” video, which stars emerging electro-pop singer Galxara, Bay Area rap star Saweetie, and the Birds Of Prey film’s Cassandra Cain actress Ella Jay Basco, set off a fierce debate online when fans noticed that Saweetie’s hair during her performance was styled similarly to fellow rising rapper Rico Nasty’s. Saweetie’s hair was gelled up into pronounced, gravity-defying spikes in a style favored by Rico, who has become known for her outlandish hairdos and embrace of punk and goth accessories like spiked collars, chains, and the attention-getting hairstyle.

The similarity prompted fans to not only question the style choice, but also Rico’s absence from the upcoming Birds Of Prey soundtrack. The soundtrack is notable for featuring an all-female roster and blending pop acts with harder-edged rap artists in an effort to reflect the film’s content and characters. It’s a strategy that has paid dividends in the past: Black Panther‘s Kendrick Lamar-curated soundtrack sounded like it could have been blasting throughout the streets of Wakanda, even if only two of the soundtrack’s songs actually made it into the movie, while Spider-Man‘s Miles Morales and friends could be heard playing the songs of the film’s soundtrack — “Sunflower” even plays an integral role to the character’s development.

However, while the Birds Of Prey soundtrack seems to have embraced the film’s girl-power ethos on the surface, the singles that have come out since haven’t quite lived up to the lofty goals set for them by the soundtrack’s predecessors. Perhaps the chaotic pairings of the assertive rapper Megan Thee Stallion with pop star Normani and the “high-maintenance” style of Saweetie with the more freewheeling Galxara are meant to be a function of the film’s lead Harley Quinn’s disorderly personality. Maybe the pieces will fall into place once the songs are put into context in the film, but that still doesn’t excuse the glaring absence of a rapper whose entire persona seems to best suit the wacky glam the movie looks to be aiming for.

On paper, a Rico Nasty placement makes perfect sense. She’s an Atlantic artist, she will presumably have an album to promote at some point this year, and her catalog to date is every bit as boisterous as the baseball bat-toting Brooklynite at the film’s center. Songs like breakout hit “Smack A Bitch” reflect Harley’s violent problem-solving proclivities, while Rico’s wide-ranging visual palette pairs perfectly with the film’s scintillating color schemes. As fans pointed out on Twitter after the release of “Sway With Me,” Rico Nasty pretty much is Harley Quinn.

That isn’t to say there’s anything wrong with Saweetie’s placement here. Like Rico, she too is a Warner artist, albeit signed to a different arm of the company than the one publishing the soundtrack. She is every bit as notorious as Rico — possibly more so, with two platinum singles to her name: Her breakout single “Icy Grl” and 2019 song of the summer candidate “My Type.” Meanwhile, Saweetie is no stranger to the soundtrack game, contributing a single along with her Quality Control boo Quavo to the 2019 Superfly soundtrack. That said, though, her approach is a lot more polished and pristine; she’s more likely to haughtily stare down a hater as she strolls past with a hair flip than to flip kick that hater’s face into the nearest wall. For what it’s worth, Rico eventually stepped in to tell fans that there was no beef between the two rappers, but with an air of someone giving a heavy sigh. She shouldn’t have had to do this.

Styling Saweetie counter to her usual look only serves to highlight the fact that she isn’t Rico. Saweetie should look like Saweetie. If the art director on the video thought that Saweetie’s normal, mid-2000s-inspired look is too generic for the happy-go-lucky explosion of color that a Harley-influenced video should be, then Saweetie didn’t even need to hold the Harley role in the video in the first place. That’s not to say that she shouldn’t be on the soundtrack — she should. In fact, more female rappers should be included — the more the merrier. But it’s self-defeating to shoehorn them into a look or a sound that doesn’t reflect their own choices. To do so runs counter the film’s messages of self-possession, independence, and empowerment.

The prime example — and the best single to be released from the soundtrack so far — is Doja Cat’s “Boss B*tch” video. The concept of the video doesn’t require uncomfortable contortions from Doja because she’s already put out high-concept, colorful clips with candy-coated costumes and quirky characters for her to portray. Having her rap over techno-inspired production works for her because she already raps over weird, unexpected sounds way outside of the usual spectrum for most rappers. She’s just being herself, which lets both her and the song shine with their full brilliance and less of the awkward, algorithmically-calculated mashup friction of Saweetie and Megan’s tracks.

There are now so many more women breaking into the rap game than ever. Whereas at one time, pitting them against each other was the industry’s default promotion plan, now it just seems unnecessary. But it will still take a while to get fans, labels, and writers out of the habit of forcing comparisons and stuff like this doesn’t help. In this instance, there are ways to evoke the cartoonish chaos of both the comic and film incarnations of Harley Quinn without also ripping off the highly iconic style popularized if not coined by the punkish Rico.

In a larger sense, it’s long past time to let the women of rap determine who they are and to find the best fit to promote them instead of trying to make them fit pre-fabricated archetypes. Harley Quinn and her Birds Of Prey are individuals who all stand out in their own ways and work best when their respective skills can complement the others, not compete. The best way to honor that is to let the women representing them musically do the same.

Birds Of Prey: The Album is out on 02/07 on Atlantic Records. Pre-order it here.