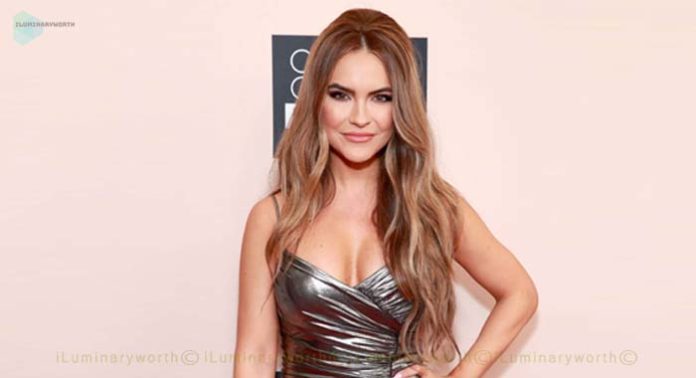 Terrina Chrishell Stause is an actor, writer, television personality and a real estate realtor. Featured twice in Los Angeles Times for representing significant estates. She has also received recognition as a neighborhood expert. She has become a household name in the U.S. and has quite a large fanbase. Chrishell Stause is among the lead cast of Netflix Originals show Selling Sunset. Selling Sunset Season 2 released on the 22nd of May featuring Chrishell Stause, Amanza Smith, Christine Quinn and other ravishing real estate agents.

Chrishell is 5 feet and 6 inches tall.

Not much information is available about Chrishell’s parents. Her father passed away on 21st April 2019 battling with lung cancer. Her mother also is undergoing treatment from lung cancer.

Chrishell was born in Draffenville, Kentucky.

Chrishell did her B.A. in theater from Murray State University in 2003.

This pic was exactly 1yr ago today. Movie premier in @balmain What a difference a year makes? But thank you to @dbleudazzled for keeping us stylish in our mask-matching athleisure ??‍♀️??? #Covidfashion #TBT #tbt❤️ #moviepremiere #booksmart #willferrell ?? #facemask

Chrishell got married to actor Justin Hartley on 28th October, 2017. But in December 2019, the couple got separated and have filed for divorce.

Ok you guys know everyone in front of the camera on #SellingSunset so I want to introduce you to some of the integral people BEHIND the camera! As Maren Morris put it- The House Don’t Fall When the Bones Are Good.? SO much work goes into what you will see (THIS FRIDAY!! 22nd) and it wouldn’t be possible without the work of so many people you never see. * If you are in this post and not tagged-let me know! Some of you are not on here or very hard to find! And a special shout out goes to @skylerwakil who happens to be one of the most photogenic people alive and yet somehow sneaks out of every shot. ???‍♀️ So this is an appreciation post to everyone that has worked so hard on the show and also for everyone that has watched season 1 & gonna watch season 2 coming the 22nd! THANK YOU ????? #BTS #NowStreaming #netflix #crew #crewappreciation #realestate #luxuryrealestate #lionsgate #lionsgatetv (Michael you are another tough one to catch ?U!!)

Chrishell started her acting career with her middle name. She got her big break in when she landed the roe of Amanda Dillon in the ABC Soap Opera, ‘All My Children.’ She has been part of shows like Days of Our Lives, Youthful Daze, Mistress, and The Young and The Restless.

Chrishell has also acted in movies like The Crimson Mask, its sequel Another Time, and Eve of Abduction. When facing a downtime in acting she decided to pursuit other avenues. She discovered she had a passion for real estate and became a licensed relator. She joined the Oppenheim Group in 2018 and has been working there since then. As a result, she became a part of Netflix’s reality show Selling Sunset.

Chrishell’s net worth as of 2020 is estimated around $3 million. Chrishell Strause’s sources of income are from multiple sources. Chrishell Stause has plenty of appearances in TV shows for the last 15 years. Chrishell made considerable amounts of money with her appearances in shows like ‘Mistress,’ ‘The Young and The Restless,’ ‘Youthful Daze,’ and ‘Misguided’.