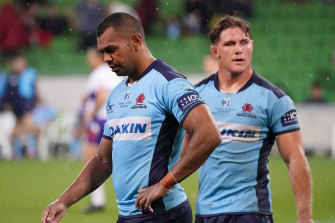 Waratahs captain Rob Simmons has made the frank admission his side was “in a hole” after their biggest ever loss to the Melbourne Rebels that leaves them winless after three rounds of Super Rugby.

It is not complete panic stations just yet for the Waratahs but their anxiety will be exacerbated knowing they will head into round five after a bye next weekend with not a single competition point to their name following a dour 24-10 loss in Melbourne on Friday night.

Kurtley Beale was guilty of some handling errors in the wet conditions.Credit:AAP

Seriously wet conditions tightened up an arm wrestle of a match that won’t go down as the most entertaining of all-time given the minimum ball in play time.

With 12 minutes remaining the Waratahs trailed by a point before Matt Toomua potted an easy penalty and then Andrew Kellaway crossed twice in the 74th and 80th minutes to get the Rebels their first victory of the season.

A couple unsuccessful Waratahs lineouts with the game on the line hurt their chances, and next week’s bye could not come at a worse time with the club sitting dead last on the ladder.

We weren’t in a position to apply enough pressure from our own errors. It seems like we get spooked a bit by the rain.

The Waratahs had never lost two games to start a season and now have three defeats to their name that has put real pressure on new coach Rob Penney, who described the result as “heartbreak”.

“We weren’t as efficient as we needed to be,” Penney said. “Rebels to their credit really dictated well. We weren’t in a position to apply enough pressure from our own errors. It seems like we get spooked a bit by the rain.” 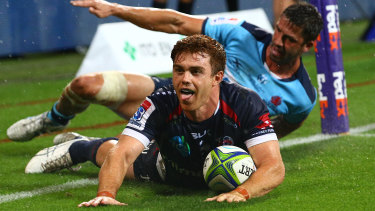 Andrew Kellaway scored two tries for the Rebels against his former side.Credit:Getty Images

Angus Bell, the 19-year-old Waratahs prop on starting debut, gave away an early scrum penalty – he could be considered a little unlucky – which presented Toomua with a kick to put the home side up 3-0. Overall, though, Bell can hold his head high after a promising 53-minute shift.

After several knock-ons from the Waratahs, the Rebels extended their lead to 8-3 when Marika Koroibete easily brushed past last defender Kurtley Beale down the left.

Reece Hodge came from the field in the 20th minute with a suspected groin injury, which gave Kellaway an opportunity against his former club.

There was a clear plan by the Waratahs to kick to the air and play territory as the rain belted down but it was NSW, and Beale in particular, who failed to put a price on ball security.

Young No.10 Will Harrison coughed up a couple of balls near his feet but his passing and kicking was tidy.

After Beale knocked on right on his team’s line, the Rebels looked to have crossed shortly after courtesy of Billy Meakes in the 38th minute but the referees ruled Koroibete was guilty of an obstruction. It was a decision that certainly could have gone either way.

After the break prop Harry Johnson-Holmes snared his second try in as many matches and NSW hit the lead 10-8.

A Toomua penalty helped the Rebels regain the lead before some overlaps down the right finished by Kellaway saw Australia’s youngest franchise seal a victory they have come so close in recent years to achieving.