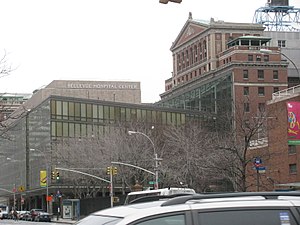 Harvey Weinstein, the disgraced entertainment executive and newest addition to the list of inmates at Rikers, was taken to the Bellevue Hospital in New York after complaining of chest pains. Just this morning Weinstein was sentenced to 23 years in prison for one count of third-degree rape and one count of a first-degree criminal sexual act against just two out of the dozens of women that spoke out against the former Hollywood big shot back in 2017.

Weinstein was rushed to Bellevue Hospital in New York City after complaining of chest pains just hours after his sentencing was announced. This is not the first time that Weinstein has complained of chest pains, as he suffers from heart and back problems and has for quite some time now.

Weinstein has a long history of health problems relating to his heart and back.

Weinstein appeared in court with a walker today after falling in prison earlier this week. A publicist that works for Weinstein claimed that he fell and hit his head and was complaining of a possible concussion before his sentencing on Wednesday. The walker, however, has made several appearances throughout his trial—a fact that many have alleged is Weinstein’s way of trying to appear weak in the eyes of a jury.

The image of a disability, according to outlets like The Times, gives the perception that Weinstein is less of a threat than he’s been accused to be. Nevertheless, Weinstein continued to appear in court with the help of his walker—crediting different ailments such as back problems on each occasion.

Weinstein’s sentencing represented a historical marker for the #MeToo movement, which was largely sparked due to Weinstein’s bombshell case back in 2017. Dozens of women revealed over the course of a couple of months that Weinstein allegedly sexually assaulted or acted inappropriately toward them over the last several decades.

Weinstein will remain in the hospital overnight.

CNN reports that Weinstein will remain in Bellevue Hospital overnight so that health officials can monitor his condition. After that, pending what happens between now and then, Weinstein will return to Rikers Island to begin his 23 year sentence.