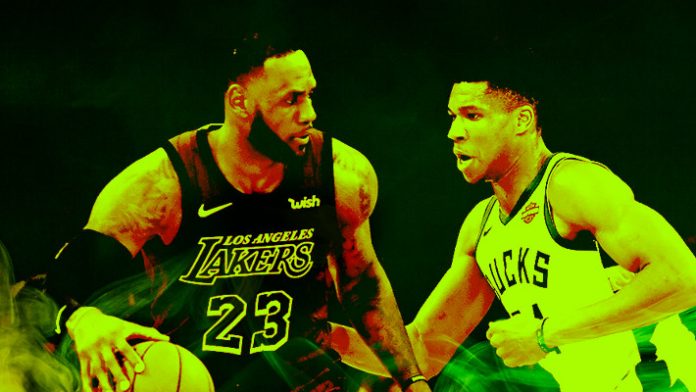 The NBA introduced a new All-Star Game format a few years back, one that is familiar to anyone who has ever played a game of pickup ball. Two team captains — the leading vote-getters from both conferences — select from a pool of eight starters and 14 bench players, and as a result, the All-Star Game is no longer a matchup between the East and the West. It’s been fun, as fans have gotten the chance to watch really fun and unique groupings of players since the format was first implemented.

Just like last year, the captains will be LeBron James and Giannis Antetokounmpo. The two will sit down in front of cameras somewhere and select their squads on TNT on Thursday night at 7 p.m. ET. But before that happens, we decided to do their jobs for them.

We flipped a coin to determine who would draft for Team LeBron (Robby) and who would draft for Team Giannis (Bill). Just like the real draft, Team LeBron goes first while picking starters, and Team Giannis goes first for the reserves. We decided to do this based on what we think should happen and not what we necessarily think will happen, which is a fun way of saying my first reserve pick was not Khris Middleton.

Without further adieu, here’s what we think the teams should look like.

There is no world where Davis isn’t getting selected first overall by LeBron. Aside from being his real life teammate, Davis is exceptionally good and kind of perfect for the All-Star Game format as a monstrous human that can jump high and dunk really well.

He may get replaced for an injury, but in the event Doncic is able to go, he’s got to go here. Imagine him and Giannis getting out on the break and tossing lobs to one another. Sounds cool, right?

I need another ball-handler at this spot and Harden is just sitting here, so let’s go with the former MVP. LeBron is always going to lean with his vet guys anyways, so I don’t think Trae would really get a look at this point.

The calculus here is basically that Luka and Giannis can both handle the ball and I need someone to battle with Anthony Davis, to whatever extent you can battle with someone at All-Star. Plus Embiid is a joy when he’s playing freely, which is how you play at All-Star.

He might be the crosstown rival, but it’s hard to see LeBron passing on Kawhi in this position with two point guards left on the board.

Trae Young was put on earth to play in an All-Star Game and do absolutely ludicrous stuff. He gives me a second lob thrower next to Luka, too.

Kemba might be perfect here, simply because he’s not going to try and swipe the spotlight [stares in Trae Young’s direction].

The last player on the board, yes, but Siakam can really, really play, and putting him alongside Embiid and Antetokounmpo would be an absolute nightmare.

Yes, Giannis is gonna take Khris Middleton, but I’m approaching this as how it should go, not necessarily how it will go. Lillard has been completely out of his mind the last few weeks and while he is not the best player in the world, no one is playing better than him right now.

While this is an exercise in what we think should happen, I can’t shake free of the idea that LeBron is LeBron and as such he will take guys he likes. Jimmy is probably deserving at this spot with Dame gone anyways, but his friendship with LeBron only further cements his selection.

Jokic gives the team a little more size. This is good, because the remainder of the field features a ton of guards and wings, and I can get my depth at those positions there.

Let’s see how many gigantic humans we can get that can handle the ball on one team. LeBron, Kawhi, Harden, and Simmons all together — plus Davis, who isn’t shabby on the ball himself — is a hilarious grouping of talent. Also, Klutch Fam. Also also, it’s about time he and Embiid got used to playing on different teams (kidding, kidding…kinda).

You really didn’t think we were gonna separate Giannis Antetokounmpo and Khris Middleton, did you?

Banana Boat Boyz For Life. I need shooting but also, friendship, and as such, CP3 fits the bill.

Not gonna lie, I am making this pick solely because Kyle Lowry is extremely cool.

I gotta get a big man and while Rudy Gobert is very good, Bam Adebayo is an ideal All-Star Game center with his athleticism on both ends.

Some perimeter scoring that I could use on the wing, and besides, Ingram has been absolutely fantastic this season. Him and the guy who gets picked next were awfully close in my book, but Ingram has been so prolific that I had to do it.

As I looked at my roster I realized I desperately needed shooting and Tatum fills that need. Also, LeBron and Tatum both love tacos (Taco TuesJay?!) so it’s a great locker room fit.

Getting Russ this late probably won’t happen because he’s Russell Westbrook, and he thrives in these sorts of games. Let’s get another lob catcher in here with how many good passers we have, too.

I have a ton of respect for Rudy Gobert’s game and how he helps the Jazz win, but he’s a bit of a weird fit in an All-Star Game, where his defensive prowess is, how do you say, a tad unnecessary. Still, he’s a great player, and I’ll happily take the size he provides here.

Well, you see, someone has to be the last pick and I will go on record guaranteeing that person is Sabonis.