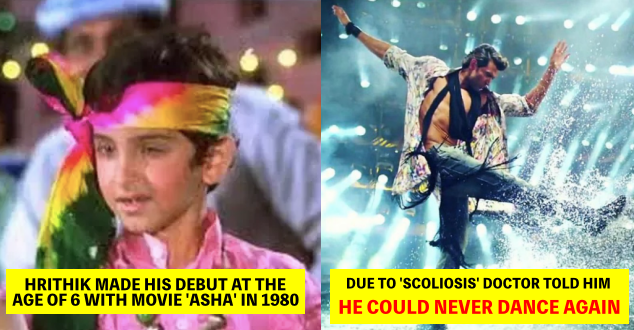 When we talk about Hrithik Roshan , there is nothing which he can’t do . From those macho looks to acting skills , from grooving dance moves to the his style statement , everything looks just perfect ..

Being a super-hit actor fron his debut , Hrithik has a great fan following .

Today , we have brought some of the points , which his fans will found interesting .

# 1 The official name of Hrithik Roshan is Hrithik Rakesh Nagrath, which is all taken from his dad and grand dad.

# 3 Hrithik has been working since his childhood , In 1986, he had this great opportunity of working with superstar Rajinikanth, in 1986 in movie Bhagwaan Dada. His father was also a part of the movie .

# 4 Hrithik was a smoker at a point of time in his life . He got inspired with a book “How to stop smoking”, and he gave up smoking.

#5 Hrithik has two thumbs in his right hand , which almost everyone knows .It is believed to be a lucky sign to born with .

#6 Hrithik was going through stammering problem . For this he had speech therapy to overcome it. Hrithik started a speech therapy institution or the people suffering from similar thing .

#7  Hrithik has already confessed that he had crush on actress Madhubala and Parveen Babi.

#8 Hrithik has even worked as an assistant to his dad Rakesh Roshan. Apparently, he was very humble even to the spot boys ..

#9 Hrithik was diagnosed with scoliosis when he was 21YO. He was told that he won’t be able to dance. But he proved it wrong as we know him as a superb dancer.

#11 He has sung songs in his 3 movies, which are Guzarish, Kites and Zindagi Na Milegi Dobara.

#12 Kaho Na Pyar Hai, was the first movie of Hrithik Roshan. This movie had won a total of 102 awards. This movie entered in Limca Book of Records for winning the highest number of awards.

# 13 Hrithik Roshan and Uday Chopra are the best friends of industry. They went to same school and also attended same computer and Karate classes.