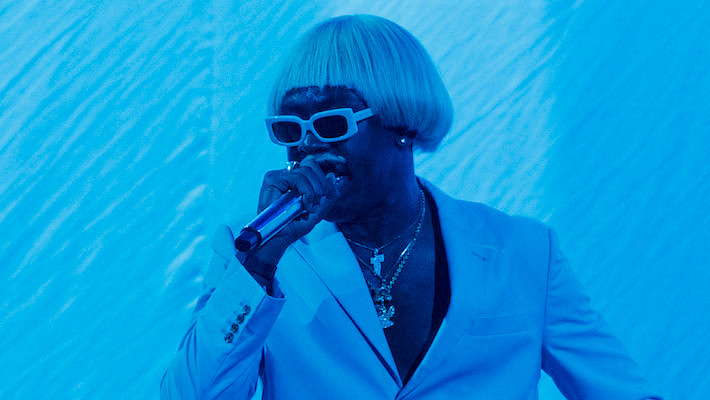 Tyler The Creator was joined by Charlie Wilson, Boyz II Men, and an army of Igor cloens for his intense Grammys performance of songs from his Best Rap Album-nominated album Igor including “Earfquake” and “New Magic Wand.” The extras wore duplicates of his signature, powder blue suit and Andy Warhol wig on a stage set to look like a burning suburban cul-de-sac. Check out the performance below.

Tyler is one of the night’s performers who is also nominated for an award. He’s up for Best Rap Album, with his album Igor competing against 21 Savage’s personal I Am > I Was, Dreamville’s collaborative Revenge Of The Dreamers III, Meek Mill’s fiery Championships, and YBN Cordae’s contemplative The Lost Boy. Of the five, Tyler has the second-most nominations after Dreamville’s J. Cole with three nominations. Tyler was nominated for Album Of The Year in 2012 for his work with fellow Odd Future member and close friend Frank Ocean on Frank’s debut Channel Orange and again in 2017 for his own Flower Boy, which was up for Best Rap Album. A win for Tyler would be his first.

Check out Tyler’s intense performance of “Earfquake” and “New Magic Wand” above and see the full list of Grammy winners here.