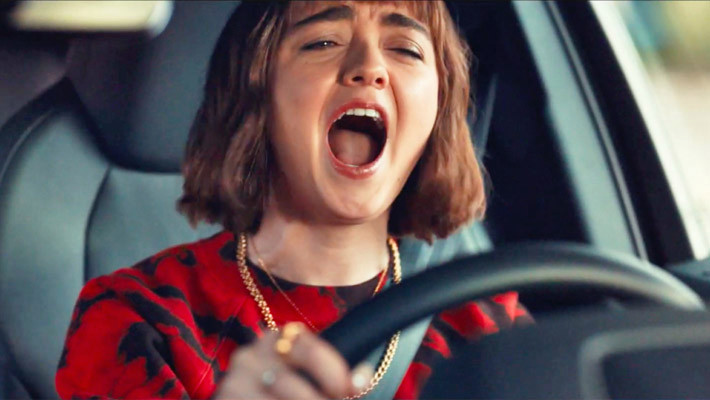 Who knew that Arya Stark had pipes? The Super Bowl ads are coming fast and furious (and not coincidentally, the Fast and Furious 9 teaser has dropped with a trailer due on Friday), and several automakers are getting in on the big game. That would include Chris Evans leading a bunch of wicked Boston accents for Hyundai, and now, Audi’s got Game of Thrones alum Maisie Williams in a traffic-busting commercial (with musical and environmental twists) for one of Audi’s electric vehicles, the e-tron Sportback.

We’ve all been where Maisie’s sitting, sort of: sitting in traffic in the heat while radio announcers comment upon the heat. Well, that’s where Disney’s Frozen anthem, “Let It Go,” comes into play. Before you know it, Maisie’s out of the gridlock and leading a musical moment while driving west of Westeros, so to speak. The actress told Vanity Fair that she’d love to do a larger musical comedy project, and even though this commercial feels random, she believes that it makes sense for her personality:

“I’ve always seen myself as a little bit cheeky. The comments I make or the way that I present my ideas is usually charged with a bit of cheek. So it made a lot of sense to be singing such an upbeat, lovely song, but really be saying a powerful message about the environment and our attitudes.”

Watch the commercial again, and check out our game coverage this Sunday at 6:30 p.m. EST, as the San Francisco 49ers go toe-to-toe with the Kansas City Chiefs.