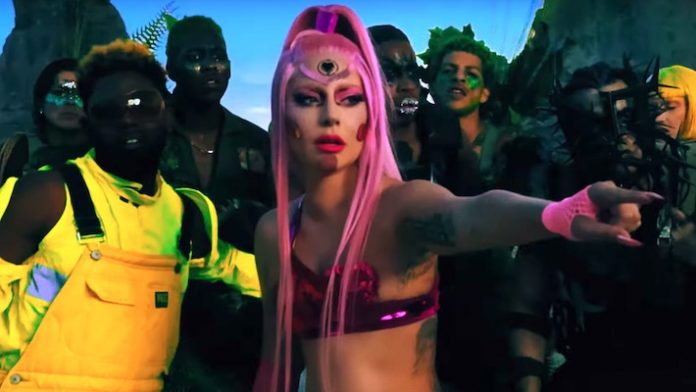 Fans are dying to know what direction Lady Gaga is going in next, especially since now that A Star Is Born is out, the connection between the movie and her last album, Joanne, is more obvious than ever. Lots of Little Monsters have chased down rumors that Gaga is actually returning to her Artpop era now that some time and distance have made the album seem a lot more palatable than it was received at the time.

Well, she didn’t release “Stupid Love” early, so don’t get your hopes up, but Gaga did release a video teaser, and while the background music doesn’t seem to indicate anything about the song — it’s really just sweeping strings — the visuals themselves say a lot. Gag and a crew of people of all ethnicities are dressed in futuristic outfits and body paint, with Gaga in a full hot pink wig, her third eye visible, and a skimpy pink costume.

It’s almost remniscent of Ariana’s outfit in “Break Free,” her Barbarella inspired video, but way weirder. The landscape is definitely designed to look alien, but everything is over-the-top, bright, and futuristic — possible ties back to Artpop? Toward the end of the 52-second-clip, Gaga begins to mouth the words “All I ever wanted was love,” while she and the rest of the people present do simple motions. Less than 24 hours and counting till this single drops, lay it on us Stefani.