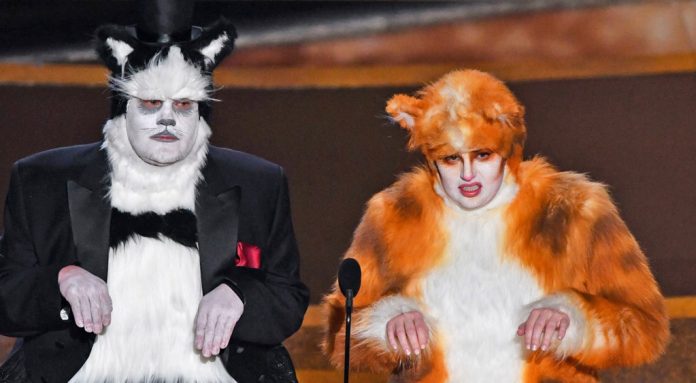 Cats was supposed to be an Oscars contender for Universal. Then it came out.

Tom Hooper’s baffling musical, starring Taylor Swift, Idris Elba, and Jennifer Hudson as singing and dancing felines, had its For Your Consideration campaign pulled after it was greeted with dismal reviews and low box office receipts. Reviews like, “A sinister, all-time disaster from which no one emerges unscathed,” and, “A boring disaster filled with joyless pussies.” Much of the cast has distanced itself from “that weird-ass movie,” as Swift put it, which made a surprise appearance at the 92nd Academy Awards.

While handing out the award for Best Visual Effects, James Corden and Rebel Wilson came out on stage while dressed as Bustopher Jones and Jennyanydots the Gumbie Cat. (He sings “Bustopher Jones: The Cat About Town” and she belts out “Jennyanydots: The Old Gumbie Cat,” because Andrew Lloyd Webber is that on the nose.) “As cast members of the motion picture Cats,” Wilson said, “nobody more than us understands the importance of good visual effects.” With all due respect to the hard-working VFX team, good joke. Corden and Wilson also batted at the microphone stand, because cats.

Even Knives Out got in on the fun: