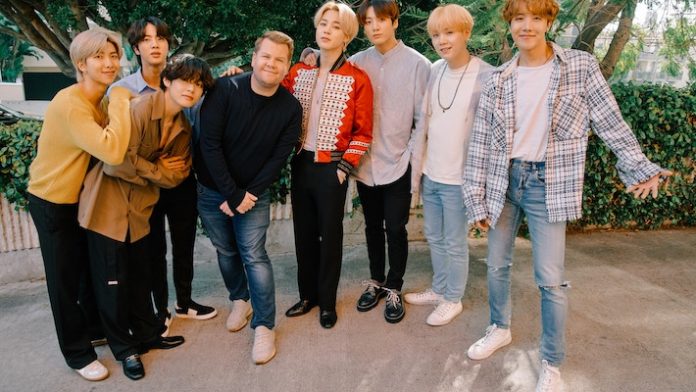 Well, BTS have been on quite a whirlwind tour during their latest press trip to America. Not only did they do a whole interview on a subway car with James Fallon last night — where they revealed how much they love John Cena, who has proclaimed himself a fan of them — but they also performed “On” from their new album Map Of The Soul: 7 at Grand Central Terminal.

Not one to be outdone, James Corden of course had to get the guys in the car for an episode of The Late Late Show‘s breakout segment, “Carpool Karaoke.” It’s actually pretty shocking the group hasn’t been on this segment before, given how huge they’ve become internationally — and they’ve got a newly announced global tour to prove it. Corden and his crew usually book a big full-size SUV, but in this case, they had to just to fit all seven members of the band in a vehicle, but it was worth it.

Singing along to plenty of their own songs, the group also did a pretty epic cover of Bruno Mars and Cardi B’s joint hit “Finesse,” discussed the impact of the tv show Friends on learning English, covered Post Malone’s “Circles,” discussed the band’s nicknames, and even got out of the car to take a a dance class at PLYOJAM. Yes, I want to go try that studio now, too. Watch the whole show above and keep your eye out for when they’re back in the US on tour.