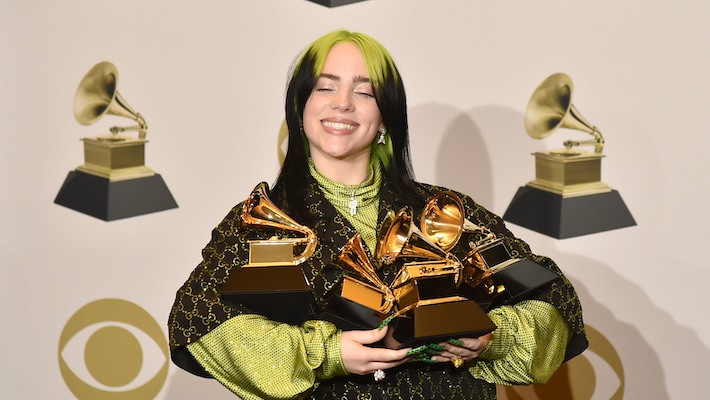 Last night’s Grammys Awards were memorable for a number of reasons, and one of the primary ones was Billie Eilish’s historic night. Aside from her tender performance of “When The Party’s Over,” she 18-year-old superstar won the four major awards, becoming the youngest person to ever do that, as well as the first woman.

Eilish spent a lot of time behind the microphone on stage last night, and after the show was over, she shared some thoughts about her astounding success.

ET‘s Kevin Frazier spoke with Eilish immediately after she accepted her final awards of the night and left the stage. She seemed to understandably be in an emotional and overwhelmed state, and when Frazier declared, “Crazy night, this turned into your night,” Eilish responded, “I guess!” When asked what all the wins meant to her, Eilish said with tears in her eyes, “Wooo! I’m dying, man. I don’t know, this sh*t is crazy! Who am I? […] This is surreal. This is like a dream, oh my god.”

Eilish then shifted the focus over to Finneas, who was asked how somebody manages to process this sort of thing, and he said, “Oh, you don’t. A couple years from now we’ll be like, ‘You remember that one time?’ No, you don’t take it in. You just thank and hug all of the people. We made an album in a very insular way, but there’s so many people on our team that help us every day, to promote our music, to make sure everybody gets a chance to hear it.”

To wrap things up, Frazier pointed out that Eilish was the youngest person to take home those four awards, and Eilish just laughed and said with a wide smile, “I’m speechless. I’m speechless.”