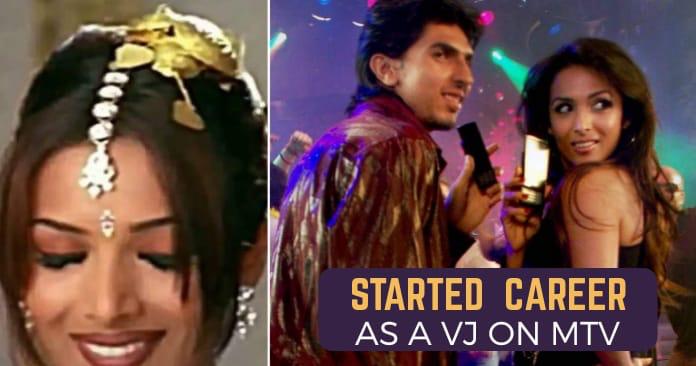 There’s one actress in Bollywood who is constant in news but not because of her films. We are talking about sizzling and hot Malaika Arora who started in the entertainment industry as a VJ in MTV and went on to be featured in many ad commercials as well as music videos in the 90s.

She got the immense popularity after her song with Shah Rukh Khan in Dil Se. The song Chaiya Chaiya became a huge hit and she never looked back after that. Her career graph rose and rose high as she appeared in many Bollywood movies and later judged many talent and dance reality shows. She even became a producer.

The inspiring journey of Malaika Arora has many ups and downs. Here we enlist some unknown facts about this gorgeous actress that will completely blow your mind. Check out the list to know more about your favorite actress.

Her dream was to become a teacher
We all want to be something since our childhood. Malaika is no exception, she wanted to pursue a career in teaching instead of acting.

She was a VJ before becoming a heartthrob in Bollywood.
One of her notable works, before she entered the Bollywood industry, was the VJ for MTV India. She was the VJ with MTV back in the 1990s. She started as an interviewer first than hosted shows like Club MTV. She had anchored Style Check and Love Line along with Cyrus Broacha.

Hard to Believe but Malaika was a Tomboy
Malaika revealed that she used to be a Tomboy in her childhood and she never liked girly stuff. This is really one of the astonishing facts here but it has been confirmed by the actress herself.

Meeting her ex-husband is one of memorable thing
How Malaika met Arbaaz? Well… as per the sources, Malaika Arora met Arbaaz Khan on the sets of a coffee commercial shoot back in the 90s and they both fell for each other. After the dating of 5 years, they decided to get married.

She followed a tough workout routine
She must get praised for maintaining the stunning figure at the age of 43. If you are also asking how then the answer is her religious work-out routine. She went to the gym thrice in a week.

Her schooling and primary education
Malaika Arora has completed her education from Chembur’s Swami Vivekanand School where her aunt Grace Polycarp was the principal. She has done her initial schooling from Holy Cross High School where she studied up to 9th class.

Malaika loves to dance from the tender age of 4
Malaika Arora loves to dance. And she has a passion for dance since her early childhood. For the record, she started learning how to dance right from the age of just 4 years.

She opened up about her divorce on Kareena Kapoor Khan’s show
Last year, on the show “What women want” hosted by Kareena Kapoor Khan, Malaika opened up on her marriage, divorce, and parenthood with honesty. She said, Arbaaz and she were making each other extremely unhappy and that affects everyone around them.

Malaika was bleeding after the song of Chaiya Chaiya
The iconic song in Dil Se was shot atop a movie train. She had to be tied with a rope for security purposes. And after the rope was removed, it was found that she was bleeding.

Her affair with Arjun Kapoor

After her divorce from Arbaaz Khan, she started dating Arjun
Kapoor who is younger than her. She bravely answers all the media questions
related to her relationship with Arjun Kapoor.

Malaika is the face of various hit albums

Malaika was seen in several music videos before she started
appearing in Bollywood movies. For instance, she was in the music video ‘Gur
Naal Ishq Mitha?’ by Malkit Singh and Bally Sagoo.

17. Malaika has done movies as well

You have seen her in item songs, but she has been playing
the lead as well in many Bollywood movies. Her last lead appearance was in the
movie EMI starring Sanjay Dutt.