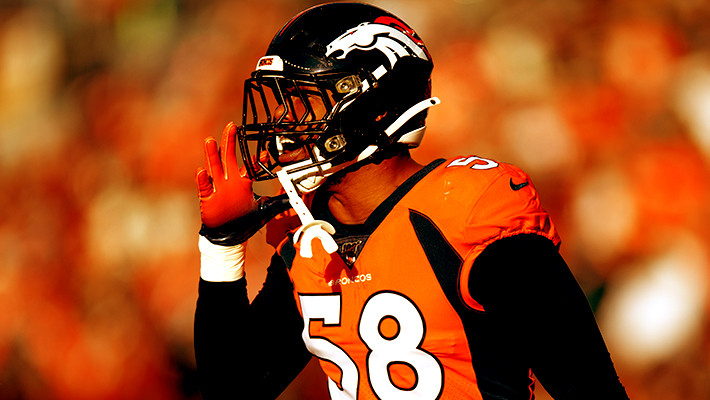 Von Miller knows the confetti won’t be orange and blue in Miami on Sunday, but he wants to be there anyway. The All-Pro linebacker for the Denver Broncos is one of the biggest stars in the league, which means whether you’re playing or promoting there’s lots to do in Miami this week.

Miller participated in the Pro Bowl in Orlando, and he’s sticking around Florida for the various events that come with Super Bowl on Sunday. But being busy in late January is good news, especially with a long offseason on the way.

“Whenever I have the opportunity to be with great guys and be teammates with some great guys, it’s all good,” Miller said.

It’s going to be a busy week for Miller in Miami, but nothing he’s not used to. Miller said he loves going to the Super Bowl whether he’s playing or not. And this year, he working with USAA to bring a military veteran along with him. Miller spoke to Uproxx while at the Pro Bowl in Orlando and talked about that veteran, Nick Lopez. He also gave some thoughts on stopping some of the NFL’s young quarterbacks and why going to the Super Bowl makes him better, whether he’s playing or not.

You’re working with USAA during Super Bowl week to bring a member of US armed services, Nick Lopez, to the Super Bowl. What was it about his story that made you want to make this happen?

Nick is a great guy. He started as a corporal in the US Marine Corps from 2005 to 2013. There’s a lot of veterans who have done great things, but it was Nick that deserved the tickets. USAA and the NFL created this Salute to Service program to really honor and appreciate our military and veterans and their families.

Look who’s going to Super Bowl LIV! Awesome to be working with @USAA again and send Marine Corps vet – and @Broncos fan – Nick Lopez to the big game with the help of the @VFWHQ. Thankful to all those who serve and their families who support them! pic.twitter.com/OldDVa3VIl

From what I read he’s taking his mom. I know you have a great relationship with your mom, so you’ve got to love that, right?

Yeah, that’s awesome. I’m a momma’s boy, so when I heard that, that was incredible.

You’ve been to the Super Bowl as a player and this time you’re going as an active player not involved in the game itself. Is it still fun to go or does it feel like you’re missing out on something?

I mean, for 31 teams you’re going to end with some kind of disappointment. There’s only one team that can really feel like they did it all, that’s the Super Bowl winner. We’ve been to the Super Bowl and we’ve lost, we’ve been there and we’ve won. Every year, even if my team doesn’t make the Super Bowl I like to go and I like to be a part of it. It’s the highest level that we have in the National Football League. It’s the biggest event that we have. So whenever I can go there and be a part of it, I like to.

That stuff rubs off on me. Even if the confetti is not blue and orange, I still feel like it rubs off on me and creates this drive to want to get there.

What’s different about preparing for a Super Bowl as a player? Is there anything about it for you that maybe fans don’t understand?

We get two weeks to work on one team. During the season everything is rushed because you have one week and you have to worry about the next game. This game, it’s all or nothing. You get to lay it all out there. It’s what it’s all about: one shot, you have a great team. Everybody knows you can have a great team one year and a terrible team the next year, so you really have to take advantage of your opportunities when you get there.

I think fans already know that, but for me, it was just one of those games where I wasn’t nervous, I was extra prepared because we had two weeks. The media coverage around it is incredible. It’s just the time of a lifetime and you really want to take advantage of that moment.

Yeah it really seems like you have to get some perspective: not every player can reach the Super Bowl and there’s no guarantee you go back. You’ve excelled when you did but you also had a year where you missed a Super Bowl with an injury — did you have a moment or two where you really got to savor the opportunity knowing it might not happen again?

One hundred percent. And I stopped and looked at how special it was from the time we won the AFC Championship Game. I knew this was a rare moment for us and I really took the time to kick with my teammates and lived in the moment that whole entire week. And I’m glad I did that because I created so many memories that I think back on every time Super Bowl season comes around.

It was a year of young quarterbacks in the league, especially in the AFC. A lot of that seems fueled by, and it sounds silly to say, but offenses that utilized the unique talents of players not typical in the NFL. How long does it take for defense to adjust to that kind of progression on offense now that it’s on tape, or has it already happened?

I feel like there’s been mobile quarterbacks in the league before and athletic quarterbacks in the league before. But they weren’t Patrick Mahomes, Deshaun Watson, Lamar Jackson. These guys are incredible, they’re super gifted. I don’t think the NFL has seen anything like these guys, and that’s what makes it special. These guys are going to go on to so many great things and they’re the future of our sport.

I saw you talk about Mitch Trubisky a few days ago and how there have been moments where he’s been really good. The narrative around him and maybe some other guys seems established, but why do you think maybe fans or media miss on their perception of quarterbacks? Is there something that people don’t really see?

Being a quarterback is one of the toughest positions in all of sports. There’s so much processing. You have to lead 53 guys to victory. If you don’t have good quarterback play there’s a slim chance that you win the game. And I think it just takes time to really embrace that. For all the greats it really takes a bit of time but when you get it, you got it. I don’t want people to give up on Mitch. He’s had some points where he’s done really great things.

Michael Strahan talked about his relationship with Eagles offensive lineman Jon Runyan and how they formed a friendship over the 17 times they played each other. Do you have a lineman you’ve formed a bond with that you’d consider a friend?

Yeah I like playing against (Las Vegas Raiders tackle) Trent Brown. He’s one of the best tackles in the league and I knew he was going to be great when he played for the 49ers and we practiced against Trent Brown. I think it was 2015. He kind of blew up and he’s the highest-paid offensive tackle in the game. I think we have a dope bond. Like when Lil Wayne found Drake, you know? Like, I knew he was going to be great from the get-go and it’s great to see him have the success that he’s having.

Is there any advice you give to pass rushers who come to play at Mile High?

JJ Watt is going to be on SNL the night before the Super Bowl. You appeared on Weekend Update after the Super Bowl a few years ago. Any advice for him going into the next week?

Any interest in hosting yourself one day? You’ve certainly showed you have comedic timing. Want to let them know you’re interested?

Oh yeah I would love to. I’d love to do that. Whenever the time comes, I’d take full advantage of that.