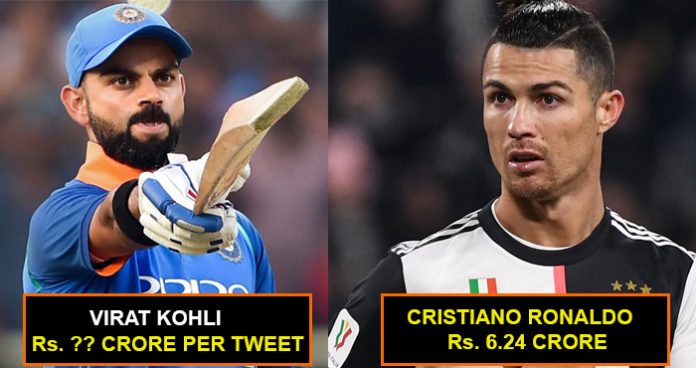 All thanks to his brilliant performance and great personality, Virat Kohli enjoys a massive fan following on both — real life and in the cricket world.

From aspiring cricketers to young boys and girls around the world, there are millions of people who consider him as their role model. From kids, youngsters to old ones, Virat is everyone’s favorite. Everyone loves watching Virat Kohli smash his opposition’s all around the ground.

While there isn’t any restriction or limit when it comes to Virat Kohli’s real-life following, on the other hand, he is one of the most followed and valuable athletes in India. And the fifth most valuable athlete in the world.

Well, according to a study by social media marketing company named Opendorse, Virat Kohli is at the fifth position in the elite list of the most valuable superstars in the sports world.

The elite list is topped by none other than Juventus and Portugal star Cristiano Ronaldo who is the most valuable sports star on Twitter. As far as earning is considered, Ronaldo, who has over 82 million followers on Twitter earns as many as,$868,604 (INR 6.24crores) per Tweet. Yes, you read that right.

At fifth position is the Indian skipper Virat Kohli who earns $350,101 (Rs 2.5 crore) per tweet. Virat Kohli is the only cricketer in the top5 of this list of the most valuable sportspersons around the world.