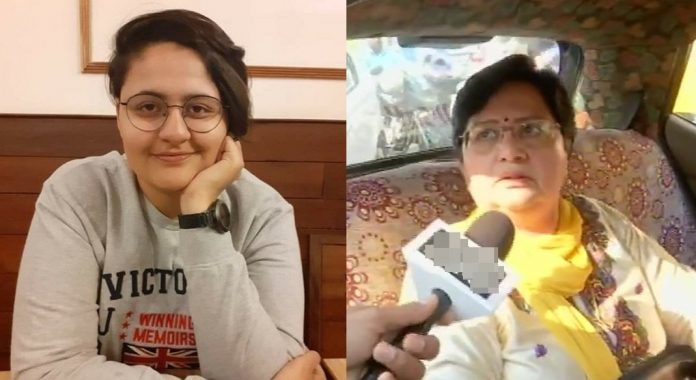 As one of the August Kranti Maidan protestors, Urvashi Chudawala, who was booked in a sedition case for raising slogans in support of radical Islamist Sharjeel Imam, filed an anticipatory bail application in Mumbai sessions court, her mother Rina Chudawala has admitted that her daughter made a mistake after being instigated by others.

“She has made a mistake but someone instigated her. We are also worried about Urvashi, she is not at home. She is a bright student, and we want her to come home as soon as possible,” Urvashi’s mother, Rina Chudawala told media after getting her statement recorded at the Azad Maidan police station Tuesday.

The Tata Institute of Social Sciences student has been absconding after Mumbai police booked her in a sedition case for shouting slogans in support of jailed Shaheen Bagh mastermind and a columnist with the leftist propaganda website, The Wire, Sharjeel Imam, at the annual LGBTQIA pride parade event in the capital city of Maharashtra, Mumbai.

Chudawala is accused of raising the slogan: “Sharjeel tere sapno ko hum manzil tak pahuchaenge (we will convert your dreams into reality)” at the ‘Queer Azadi’ rally on February 1 in Mumbai, organised to celebrate and commemorate the queer history.

The Mumbai police had booked Chudawala along with 50 others under Sections 124A (Sedition), 153B, 505, 34 of the Indian Penal Code (IPC). The police confirmed that Chudawala has not returned to her hostel for the last two days, adding her phone was also unreachable. The police have written to TISS to provide information clues regarding her whereabouts.

Four teams have been found to trace the student. Chudawala was booked on the basis of a complaint made by BJP leader Kirit Somaiya.

Somaiya in his Tweet today said: “I filed a complaint with Mumbai Police on anti-national demonstration/slogans in support of Sharjeel Imam during 1 Feb LGBT program. The Thackeray government asked police not to register FIR. I will start ‘DHARNA’ at Azad Maidan Police Station if action not taken in 3 days.”

Earlier, Maharashtra Home Minister Anil Deshmukh had said that action will be taken against her after which the case was filed.

The Queer Azaadi Mumbai Pride’s “solidarity gathering” in Mumbai at Azaad Maidaan was used by anti-CAA propagandists to link the cause of the LGBTQIA community with the Azadi slogans raised against the Citizenship Amendment Act, NRC and NPR.

However, the gathering was put to use by anti-CAA protesters to promote their propaganda. They not only raised pro-Sharjeel and pro-Azadi slogans but also carried and wielded placards denouncing the new Citizenship Law that intends to grant citizenship to persecuted minorities from Pakistan, Bangladesh and Afghanistan. One of the placards also demanded independence of Kashmir, along with criticising CAA and NRC.

Sharjeel Imam, who masterminded the Shaheen Bagh road blockade to protest against the CAA, was arrested by Delhi Police from Bihar after multiple FIRs were filed against him for his seditious speech. Addressing a gathering at Aligarh, Imam had urged Muslims to come together and cut off the Siliguri Corridor aka the chicken’s neck, which connects the seven northeastern states to rest of India. He had also earlier made provocative speeches where he had asked Muslims to come out and block roads of India and bring it to a standstill so as to get international media attention.