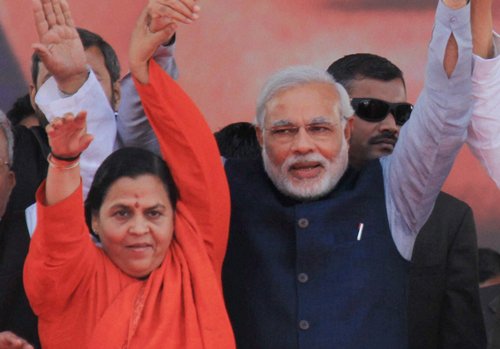 Bhopal: In a curious tweet, senior BJP leader Uma Bharti has hailed Narendra Modi as “Chhatrapati” and said the results of “recent” assembly polls have established the Prime Minister as the unparallelled leader in the country.

Bharti posted the tweet on the day the Aam Aadmi Party (AAP) decimated the BJP in the Delhi assembly polls, results of which were announced Tuesday.

“Elections were held in various states in the last two-and-a-half years ahead of the Lok Sabha polls (in 2019). Recently, elections were held to different assemblies whose results clearly manifest that there is no leader in the BJP and the country like prime minister Narendra Modi,” Bharti tweeted in Hindi.

Notably, the BJP had lost elections in Punjab, Madhya Pradesh, Chhattisgarh and Rajasthan to the Congress before the Lok Sabha polls, which were held during May-June, 2019.

After the general elections, the BJP lost power in Maharashtra and Jharkand but scraped through in Haryana. The BJP received a severe drubbing by the AAP in Delhi polls Tuesday.

“People of the whole country and Modiji have embraced each other. Chhatrapati Modi Jindabad,” Bharti wrote in another tweet.

Recently, a book written by a BJP leader comparing the prime minister with the founder of Maratha empire had caused a huge political row.

Interestingly, Bharti had recently said the newly-formed trust to oversee the construction of a temple of Lord Ram in Ayodhya should also include an OBC face.

She was one of the prominent leaders of the Ram Janmabhhomi movement in the 1990s that culminated into demolition of the Babri Masjid in Ayodhya December 6, 1992.