Fight fans couldn’t believe their eyes when a monstrous right hand out of nowhere turned a fighters lights out in an instant.

The wrath of Jon Jones 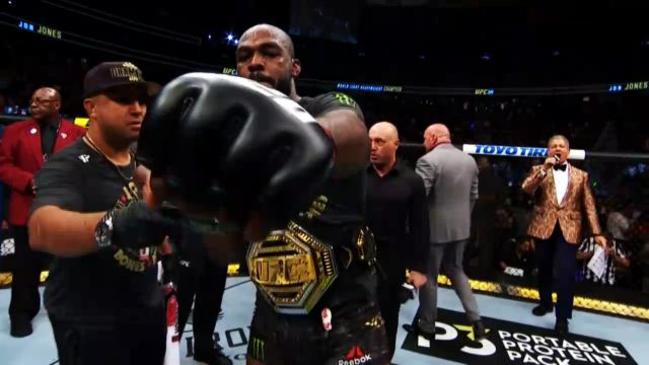 Welcome to our live coverage of UFC

Jon Jones returns to the octagon to once again defend his light heavyweight title as he looks to keep his 16 fight win-streak alive.

Looking to take his belt away will be the powerful striker Dominick Reyes who has yet to lose in his UFC career, sitting at a perfect 12-0.

The co-main event will see assassin Valentina Shevchenko step foot back in the Octagon against Katlyn Chookagian.

The early fights have delivered for UFC fans, with Journey Newson putting the final stamp on proceedings with a monster knockout.

Domingo Pilarte came out strong with a huge head kick followed up by a right hand, but then it was Newson’s turn and his right hand landed right on the button.

The monstrous right hook dropped Pilarte to the canvas instantly before Newsom jumped on and landed a few more blows before the fight was brought to an end in less than a minute.

FROM OUT OF NOWHERE! HUGE KO for @NewsonJourney #UFC247 pic.twitter.com/Ee93gLFHaV

That punch would have put down a horse. #UFC247

Oh my! Newson with the quick finish #UFC247

The second fight of the night has been met with widespread criticism after the judges scorecards were read out.

Andre Ewell and Jonathan Martinez put on a contender for fight of the night, but in the aftermath fans, UFC fighters and commentator Joe Rogan were left seeing red.

Ewell was named the winner with two judges split, handing each fighter a 29-28 victory. The third judge however saw it as one-way traffic and had it 30-27 in favour of Ewell.

How he came to that score we’ll never know, but nobody was happy about it.

@joerogan is right. That one was criminal. 30-27 judge needs to be impeached #UFC247

That 30-27 Ewell scorecard is one of the worst I’ve ever seen. Abysmal start to this #UFC247 card.

Sick to my stomach