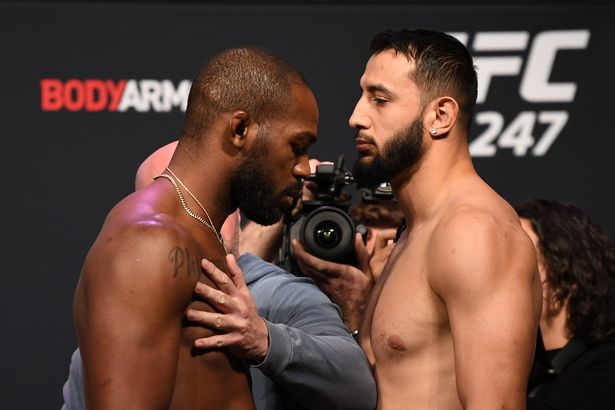 Jon Jones takes on Dominick Reyes tonight as he looks to continue his reign as the UFC’s light-heavyweight champion.

Jones is in his second spell as champion having been stripped of the belt four years ago following a failed drug test.

He won it back by beating Alexander Gustafsson for a second time before winning a back-and-forth battle with Thiago Santos last summer.

Reyes is won all 12 of his mixed martial arts bouts, most recently beating Chris Weidman in the first round last October.

Here is everything you need to know…

Is there a free live stream?

EE customers can take advantage of a free BT Sport trial and watch the clash without paying a penny.

If you are not an EE customer you will have to sign up to BT Sport and watch the fight that way.

What TV channel is the fight on?

The fights will be shown on BT Sport 2 from 1am with the main card starting at 3am.

What time will it start?

The main event will start at around 5.30am UK time.

Jon Jones is confident he is ready to deal with Dominick Reyes’ kickboxing prowess.

“He has a tremendous left hand. I’m sure he’s going to work on his right hand, especially because I’ve brought it up so much. But my job is not to go out there and get into a boxing match.

“So I’ve just got to respect him tremendously, which I have. We’ve done everything possible that we can do to be strong mentally, spiritually, physically for this fight. He’s a worthy opponent.”