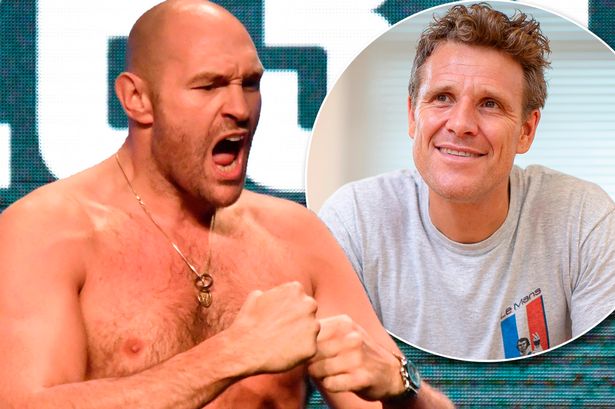 Tyson Fury was branded a “sick man” by his team-mates after admitting he loves a bacon and Mars bar sandwich.

The Gyspy King is preparing to take on Deontay Wilder on February 22, 14 months after fighting to a controversial draw.

It sees the Englishman continue his incredible comeback to the sport after suffering mental health problems and climbing to 180kg.

He has since lost 60kg – but the heavyweight boxer admitted keeping some treats in his routine.

In the clip, Fury is getting a massage after a training session.

The conversation soon turns to recovery food – and the Gypsy King reveals his bizarre choice.

“Two slices of bacon and a Mars bar, close it and eat it.”

Fury has a cheeky smile on his face as he calls the delicacy “unbelievable”.

But there is an awkward silence as his team are left baffled.

Fury, though, goes to suggest a second course.

“I’ll tell you what’s even better,” the Gypsy King adds.

“Tuna mayonnaise sandwiches with Wotsits crushed in them.”

All the team can do is yell out “what” before laughing.

This footage was shared on YouTube by BT Sport Boxing on Monday, where it has been viewed nearly 400,000 times.

And fans were left in stitches at the Mancunian’s dietary suggestions.

“Wotsits in a tuna sandwich – I’ve heard it all now,” one said.

“Can’t wait for this fight.”

Another commented: “Tyson is one funny guy.

While a third added was ready to take the Gyspy King’s advice.

“I’m one for the tuna mayo with Wotsits,” they said.

And a fourth added: “Bacon and Mars bar sounds banging.”

With a fifth simply saying: “There really is only one Tyson Fury.”

It comes as the Gypsy King’s hero Mike Tyson appeared in an epic trailer for the fight against Wilder.