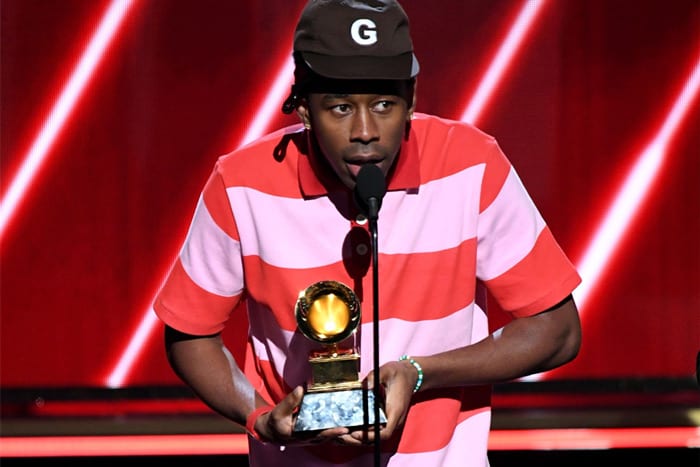 Rapper Tyler the Creator won his first Grammy award for his 2019 album, IGOR. But as exciting as the moment should be, Tyler expressed his true feelings about the win.

His Grammy acceptance was full of excitement, and his mom even joined him on stage with tears of joy. He thanked his crew and his fans for trusting him and his ideas, explaining how he was never fully felt accepted in the world of rap. He also thanked Pharrell Williams, stating that Williams allowed him to be comfortable with who he is as a person.

Following his speech, Tyler spoke to reporters and admitted that he wished he could receive more recognition, and not only as an ‘urban’ artist. He also answered a question based on the recent voting discrepancies brought on by former Recording Academy CEO, Deborah Dugan.

“On one side, I’m very grateful that what I made could just be acknowledged in a world like this. But also, it sucks that whenever we—and I mean guys that look like me—do anything that’s genre-bending, they always put it in a ‘rap’ or ‘urban’ category.”

He explained how categories like that feel like “a politically correct way to say the N-word,” and wonders why he and other cannot just be in the ‘pop’ category.

“Half of me feels like the rap nomination was a backhanded compliment. Like, ‘Oh, my little cousin wants to play the game, let’s give him an unplugged controller so he can shut up and feel good about it.’ That’s what it felt like a bit. Another half of me is very grateful that my art can be acknowledged on a level like this when I don’t do the radio stuff, I’m not played in Target. I’m in a whole different world than what a lot of people here listen to. I’m grateful and like ‘eh.’”

Race And The Grammys

Tyler’s speech further brings up the topic of racism within the Grammys and the Recording Academy. For years, the Academy has received backlash for its lack of diversity within Grammy nominees and performers.

In 1989, Will Smith and DJ Jazzy Jeff boycotted the Grammys after the very first Best Rap Performance award would be announced off-air. Artists Salt-N-Pepa, Russell Simmons and LL Cool J also joined in the boycott that year. Frank Ocean refrained from submitting his music for any nominations in 2016 due to the Grammys’ “dated” system. Additionally, Beyoncé and Jay Z attended this year’s Roc Nation brunch and pre-Grammys gala, but cancelled their Grammys appearances.

At said gala on January 25, rapper Sean ‘Diddy’ Combs expressed his true feelings to the Academy and how they have treated black artists during his acceptance speech for the 2020 Grammy Salute to Industry Icons award. He touched on how music is the only thing some artists have and how the genre of hip-hop has never been respected.

“There’s something I need to say to the Grammys… I say this with love to the Grammys because you really need to know this. Every year, y’all be killing us, man… This current situation is not a revelation. It’s been going on around the world, and for years we’ve allowed institutions that have never had our interests at heart to judge us. And that stops right now. I’m officially starting a clock. Y’all got 365 days to get this sh*t together.”

Following Saturday’s gala, interim Recording Academy CEO and chairman Harvey Mason Jr. released a statement on how to make the Grammys more diverse and inclusive. The plan includes a 5-step initiative on how to go about said changes, including the hiring of a “dedicated Diversity & Inclusion Officer” in the next 90 days. However, Dugan and the Recording Academy task force—established two years ago following comments made by former Academy president, Neil Portnow—already began implementing said plans in 2019. But will these plans help?

Watching how the Grammys have changed over the years is a bit disheartening because as “Music’s Biggest Night,” it should be a night to celebrate every artist and every genre equally. Maybe the coming year will bring forth these changes, maybe it won’t. But the only thing we can do now is wait; we must wait to see if said plans will come to fruition and see if change really does occur within the Recording Academy.