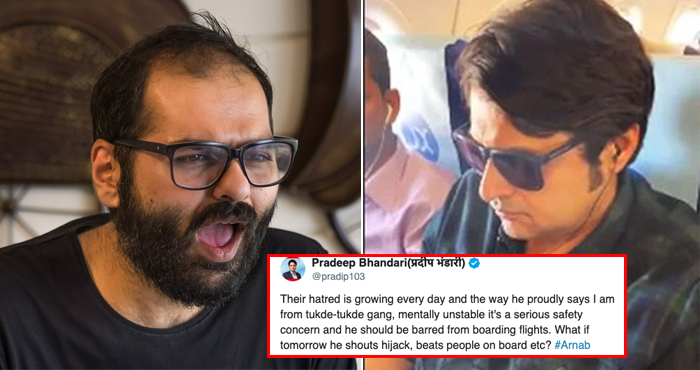 Host of a political-comedy podcast and popular stand up comedian, Kunal Kamra is well known for his fearless and sharp-witted material.

He has had shows cancelled earlier because of his political comments. Today, all across twitter, there is a demand to put him on a no-fly list.

Kunal Kamra tries to troll Arnab Goswami on an airplane.

Firstly this is infringement of private space. Apparently for which leftists fight. Privacy.

Secondly, Kunal Kamra will shit huge bricks if somebody else will do this to him. He will call the cops and cry fascism.

Wondering what he did this time to incur such a response? Continue reading to find out.

Released on Twitter , this is Kunal’s statement, regarding the events that occurred in an Indigo flight today which involved famous journalist and majority owner of RepublicTV, Mr. Arnab Goswami.

“Today I met Arnab Goswami in a flight to Lucknow (6E5317), and politely asked him to have a conversation. At first, he pretended to be on a phone call. I waited for his so called phone call to get over. Seatbelt signs were off at this time. I gave him a monologue about what I felt about his ‘journalism’. He refused to answer any questions, he called me ‘mentally unstable’.

He said he is watching something, and he doesn’t want to talk. So then I did exactly what Republic TV journalists do to people in their private/public spaces and I don’t regret it. I am not sorry for it.

The moment the stewardess asked me to move, I went back to my seat in 20 seconds. I apologised to each member personally and to both the pilots, by staying back till the end, for any inconvenience that I might have caused during the flight.

I don’t think I did anything wrong/criminal. Don’t let this be about my bravado. Let us all take a moment and fondly remember a smiling Rohit Vemula.

I do apologise to every passenger except one.”

Kunal also shared a video of Arnab in the flight, where Kunal can be seen trying to elicit a response from Arnab but Arnab not choosing to reply back.

I did this for my hero…
I did it for Rohit pic.twitter.com/aMSdiTanHo

Here are a few tweets that better express, how the citizens felt after watching the video.

Kunal should be classified under #nofly list as an unruly passenger and should be banned from flying immediately. He put the flight and passengers at risk from his behavior. #arnab. Civil aviation rules have this provision @DGCAIndia @AmitShah

Harassing and heckling any person on a flight is not only a crime but also a big safety issue. If @MoCA_GoI and @IndiGo6E fail to take any action then this would mean normalising this behaviour. Today’s its verbal harassment tomorrow it could be physical assault. #Arnab

About the #Arnab plane issue – all I want to know if verbal assault is allowed on a plane or qualifies as dangerous behaviour?

In the US an altercation or aggressive behaviour like this would get you into trouble with air Marshalls. Where do domestic airlines stand on this?

Their hatred is growing every day and the way he proudly says I am from tukde-tukde gang, mentally unstable it’s a serious safety concern and he should be barred from boarding flights. What if tomorrow he shouts hijack, beats people on board etc? #Arnab

My respect for @ArnabGoswamiRtv tripled after seeing this. This is a blatant violation of a man’s privacy.
Kunal Kamra please fuck off, okay?
He has an opinion, he says it on air. You have an opinion, you harass him on a flight.
Want humanity? Learn some etiquette first.#arnab https://t.co/NiQUm3zbE0

@IndiGo6E we want an immediate action here. What happened with #Arnab is a shame for you. Will you put @kunalkamra88 in #noflylist or do your company need a #boycott trend? This is passenger safely issue, and as a frequent flyer this is my right to ask you to take action.