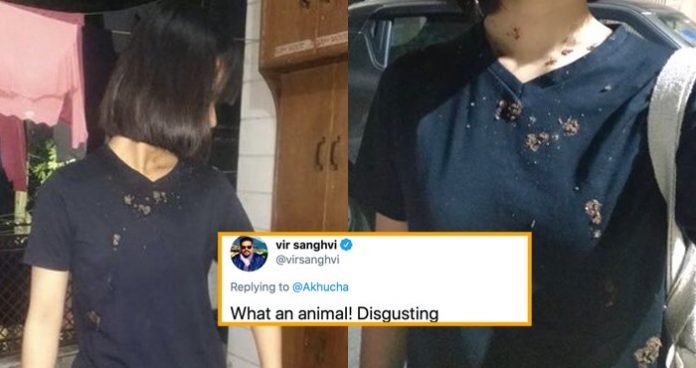 The outbreak of Coronavirus has led to a widespread state of fear and panic all around the world. While people all around the country are trying their best to spread awareness about the disease and keep the environment light and filled with positivity, on the other hand, several people have taken the help of social media to bring their stories of hara*sment and social discrimination.

Lately, a very shameful incident has come to the limelight where a middle-aged man spat on a Manipuri woman and called her ‘Corona’, after which he fled on his scooter.

Well, the disturbing event took place on Sunday night in the Vijay Nagar area of North Delhi. The Manipuri woman was returning back to her home after buying groceries. The girl was walking down a dark lane, when a middle-aged man came from nowhere he spat ‘Gutkha’ on her t-shirt and face and fled away.

The incident was brought into the limelight by a Twitter user named ‘@Akhucha’, who shared two pictures of the girl who was haras*ed. Sharing the incident, the Twitter user wrote:

“A Manipuri girl at Vijay Nagar, Delhi was spat on by an middle aged man and shouted at “Corona” before fleeing on his white scooty.#Racism #COVIDー19″

A Manipuri girl at Vijay Nagar, Delhi was spat on by an middle aged man and shouted at “Corona” before fleeing on his white scooty.#Racism #COVIDー19 pic.twitter.com/H2fgR0yzzt

The tweet soon went viral with many prominent people and commoners urging for investigation from Delhi Police. Angry Twitterati are disgusted by what happened with the girl.

Utterly shameful. This nation is beyond repairs!

This is utterly reprehensible. The person who has done this deserves to be dragged into jail.

What a vicious, despicable thing to do – for shame! I am so deeply saddened and sorry to read this.

Beautiful people of North East have always loved this country, any disrespect to them is a wound inflicted on the soul of India. With love from fellow Indian.

What an animal! Disgusting

Here, check out the reactions of Twitterati on this. A case has been filed on the unidentified man under section 509 of the Indian Penal Code. Talking about the same, Vijyanta Arya, DCP (North West Delhi) said:

“We are scanning the CCTV in the area to identify the man on white colour Scooty,”

Delhi Police has registered a case under section 509 of the Indian Penal Code against a man who allegedly spat on a woman belonging to Manipur and called her “Corona” in Vijay Nagar area of north Delhi last night. pic.twitter.com/lBk88QGr8U