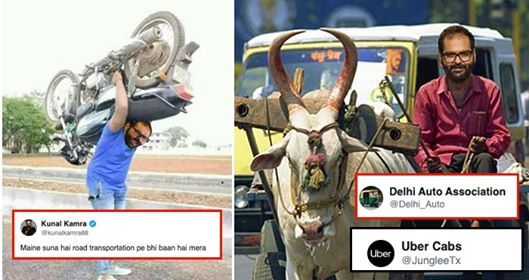 Comedian Kunal Kamra created a stir on social media yesterday after he shared a video of himself confronting journalist Arnab Goswami onboard via his Twitter handle.

In the video, Kunal Kamra can be seen giving a monologue about Arnab Goswami’s ‘journalism’ on a flight, while Arnab has plugged his earphones and was trying his best to not respond Kunal Kamra. The video went viral in no time and soon Kunal Kamra was banned by the IndiGo Airlines.

We are left with no option but to advise other airlines to impose similar restrictions on the person concerned. https://t.co/UHKKZfdTVS

IndiGo Airlines’ announcement of banning Kunal Kamra, was followed by a tweet from Mr. Hardeep Singh Puri where he “advised other airlines to impose similar restrictions” on Kunal Kamra. Soon many other domestic airlines joined the bandwagon of banning the comedian for barging into Arnab Goswami’s personal space.

Kunal Kamra did ethically wrong by barging the personal space of Arnab Goswami. But the way authorities dealt with the situation didn’t go down well with the Twitter users. Twitterati are now trolling Kunal Kamra by taking hilarious digs at his ban and banning him from several other things as well. In fact, Kunal Kamra himself took a hilarious dig by tweeting:

In view of the incident onboard @IndiGo6E, JetAirways wishes to inform that conduct of Person concerned is unacceptable. To discourage such behavior onboard flts, Mr Kunal Kamra is suspended from flying on any Jet Airways flt until further notice @HardeepSPuri#JetAirways

In light upon recent incident happened on Indigo flight we wish to inform that our union has taken unanimous decision of suspending Mr. @kunalkamra88 from riding in Tri Cycles for a period of six months. We would also demand him to give us back his childhood pic with Tricycle. https://t.co/GXDhmZ3CZ9

3. Even the Bus association seems to have taken a call on banning Kunal Kamra. They Tweeted:

In view of the incident onboard @IndiGo6E, Uber India wishes to inform that conduct of @kunalkamra88 was unacceptable. With a view to discourage such behavior onboard, Mr Kunal Kamra is suspended from traveling on any Uber cab until further notice.

In view of the incident onboard @IndiGo6E, Delhi Auto association wishes to inform that conduct of @kunalkamra88 was unacceptable, With a view to discourage such behavior onboard, Mr Kunal Kamra is suspended from traveling on any CNG Auto in delhi until further notice.

6. The last and the best one, a bullock cart might also ban him! :

Following all these bans, Kunal Kamra had only one thing to say  “Modiji can I walk yaan uspe bhi baan hai…”