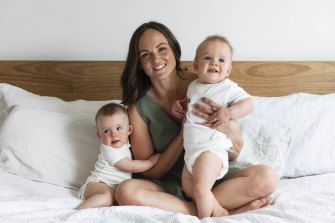 On Saturday afternoon Melbourne star Daisy Pearce will make her anticipated return to play with the Demons against North Melbourne at Casey Fields.

It will be the first AFLW game for 693 days for Melbourne’s 2017 and 2018 best and fairest and All-Australian.

Daisy Pearce with her twins Sylvie and Roy. Credit:Hilary Walker

“Ben took time off work. I wasn’t doing it all. He was doing a lot of it. He was coming to the gym with us and I had amazing support,” Pearce said.

“For all the mums out there, who think, ‘shit I have not even got dressed’ be assured the days when Ben wasn’t there … I didn’t get dressed either.

“It’s the most challenging thing and it is hard work and often relentless, but the joy continually outweighs that and at no stage is it not worth it. It has brought us so much laughter and happiness and joy.”

Pearce recommitted to playing footy in 2020 back in April – as the league’s rules require.

The twins were not yet three months old while Pearce was still in what she now describes as “the haze”.

“There was no plan but as the thickest part of the haze started lifting I started thinking of footy again,” Pearce said.

In May she sat down with Demons coach Mick Stinear, club physio Kathleen Sakadjian and high performance manager Kayne Jones to sketch out a mud map as a guide to her comeback.

There was little research available to detail the path a female athlete breastfeeding twins after a caesarean delivery should follow to return to a contact sport.

Sakadjian and Pearce began the journey with several visits to a post-natal women’s health physio focusing on abdominal recovery and pelvic floor exercises before attempting anything more strenuous.

“Early on it feels like you are in someone else’s body,” Pearce said.

“I am a 60-kilo human who weighed 94 kilos the night before I had these babies. You are so far removed from your physical self it is hard to fathom.

“When I started training the simplest of movements felt hard and my mind and body weren’t connected.”

A loose program was developed as Pearce grappled emotionally with the reality of having to accept help and the uncertainty created when she had to forgo the structured, disciplined approach that formerly gave her confidence.

“Some days we would step it forward and other days we would back it off because I didn’t feel right or hadn’t slept or something else was getting thrown in the mix again,” she said.

“I had defined myself as doing more than I thought my opponents would be doing or trying to find an edge. 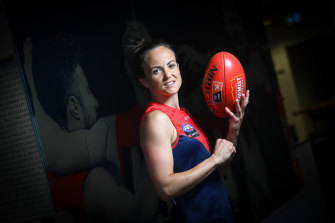 Daisy Pearce is back in action this weekend.Credit:Justin McManus

“Doing more was what I based my self-belief on, but you can’t do more, you are doing less and doing it from a lower starting point.”

And in a practical sense she felt clunky as her body and mind re-learned what had once seemed natural.

“That is the challenge in all those moments not thinking, ‘this is too hard, and I am so far off it’. The ego side of it is hard to deal with too,” Pearce said.

Nova Fit Australia loaned Pearce a Watt Bike so she could train in the spare room with the babies watching on. Ben’s former football club Olinda in the Dandenongs – near where they were living – gave her the keys to their gym.

Pearce would head there at 10pm when the children were put to bed, stealing any time she could.

She laughs at the ridiculousness of anyone being left with the impression that she had it sorted.

“The goal of playing footy again would make me get on the bike or do the gym session all the times that I didn’t want to – which was most of that time when you are in that moment, running off stuff-all sleep, a terrible diet because you just don’t have time to cook for yourself and you are exhausted in every possible way,” Pearce said.

There were other mental challenges too as Pearce, the go-getter who worked as a midwife before excelling in the media, struggled to accept the help coming her way.

It wasn’t that she wasn’t appreciative – her preferred mode was giving support rather than accepting it.

“You go from being the one who is out there helping everyone else along to then having to accept that people are coming to help you,” Pearce said. “You feel a bit like a charity.”

For Pearce the physical battle was easier than the mental challenge.

Even after much progress had been made, Pearce nearly abandoned her comeback just before Christmas.

Training had become a constant grind. Once again, she felt inadequate overcome with self-doubt where self-belief had once flourished.

She had a sense that reaching former heights was unrealistic. “It crossed my mind I was kidding myself,” Pearce said.

“I was burning the candle at both ends over and over again. I got sick and then the kids got sick and the household was turned on its head. I just hit the wall and I thought, ‘I can’t do this.’ “ 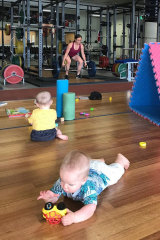 Daisy Pearce hard at work while her twins amuse themselves.

A meeting with Stinear reassured Pearce she had the support to manage her preparation according to what was practically possible rather than holding on to her perfectionist streak.

Gradually confidence returned in the new year, with Pearce recording a personal-best two-kilometre time. Her renowned skills were also on full display against Collingwood in the practice match. The nerves dissipated. She realised she could still read the play and her enjoyment of the game was back, in full.

“I am not very sentimental or reflective. I don’t want any fuss made … but over the last few weeks when thinking, ‘shit I am going to get there’. I have had moments of feeling proud not just for me but for (everyone who has helped me),” Pearce said.

But don’t think for one moment football is number one. Pearce’s priorities are clear.

“When our fixture usually comes out I am scouring through it to work out when we travel, who we play, when we play this hot team, but this year the only thing I looked at was when the twins’ birthday was and whether I was playing (then) or not,” Pearce said.

The football gods looked after her as Melbourne play on February 14 – Valentine’s Day – the night before the twins’ first birthday.