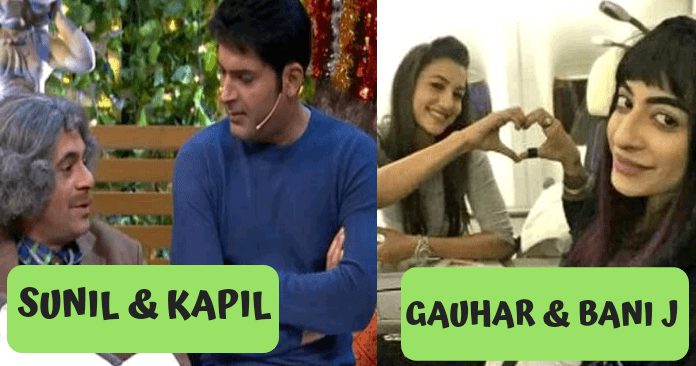 Friendship is considered one of the most special and strongest bonds of all time. And it is heartbreaking to see friends falling apart.

Usually, some differences or misunderstandings work like acid in their lives, and they thought its better not to be in touch with their so-called friends.

We have seen that equations change between people in just a flick of a second in the entertainment industry. However, some actors managed to maintain their friendship and relationship smoothly, some actors, unfortunately, have parted their ways.

We enlist 7 big fights between the TV Celebs that caught Medias’ and fans’ attention.

The entertainment industry is famous for various catfights. And people working in the same profession do fights as well. Most of the fights get resolved as time passed. However, some remain unsolved like a wound for long years.

Once considered as a best friend forever, TV actresses Sanjeeda Sheikh and Naagin Fame Mouni Roy are not on talking terms with each other. Nobody knows the reason what wrong had happened in their friendship.

What people know is that they have unfollowed each other on social media and stopped wishing even Birthday to each other.

One of the biggest TV fights yet happened between the Funnyman Kapil Sharma and Sunil Grover. They both used to share a great bond and work together for years.

They had a huge fight on an airplane, and both are not talking to each other now. It is rumored that Kapil hit Sunil Grover and then fight turned huge and ugly. It also had affected the career of both actors.

Kapil went into depression and lost one year where the whole crew of The Kapil Sharma Show remained jobless.

Parth Samthaan And VIkkas Gupta used to have friends before until the former accused the latter of molestation. This news had created a lot of headlines for TV reporters. The ugly spat between these two shocked almost everyone.

At that time, both of them took digs at each other
publically and washed their linen in public. You still can see their fiery
interviews where they said words to each other. However, both of them come on
cordial terms now.

Sidharth Shukla and Asim Riaz became a fast friend while performing inside the house of Bigg Boss season 13.

Everyone’s talking about the brotherhood and the bond they both shared throughout the show. However, both the man of the shows got some conflicts and misunderstand and parted their ways.

Still, you can see the whole Bigg Boss season 13 to know the
equation both the actors were sharing and how they came to an end and never
thought to be each other’s back again.

However, they have unfollowed each other on Instagram last year. It is rumored that Devoleena cut all ties with Bhavini Purohit. They both are avoiding each other as well.

Gauhar Khan and Bani Judge were more like a family instead of friends. You can see the clip when Gauhar Khan entered into Bigg Boss house to meet Bani J.

However, this friend-cum-family bond broke between these two and now they also unfollowed each other on social media. Why they took separate ways is still not clear.

Dipika Kakar and Jyotsana Chandola used to work in the same serial. They have worked together for years and developed a great friendship bond over time.

It is rumored that
the great friendship bond came to an end after the Bigg Boss. However, Jyotsana
also admitted that she is not friends with Dipika Kakar anymore. The reason for
their broken friendship is not revealed yet.

People working in the same industry often see many clashes and fights. Even Bollywood has many fights that made headlines. We wish they came forward, initiate first, and become friends again in 2020.

Usually, it all happens because of misunderstanding and then ego plays a vital role. They all are grownups and fans care for their relationships as well.