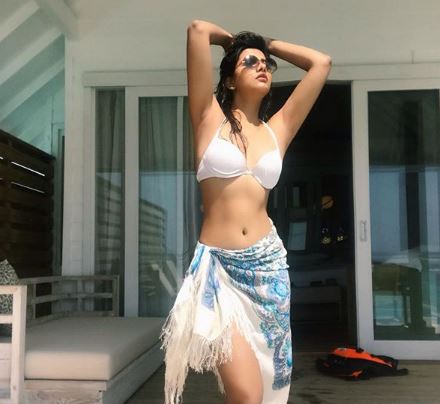 She is enjoying in Maldives and sharing teasing bikini pictures flaunting her curvaceous body.

The actress optioned for a white bikini with a stylish blue wrap skirt paired with spectacles.

She is primarily known for her portrayals of Niyati in Kulvaddhu, Anjali in Iss Pyaar Ko Kya Naam Doon? and Manjiri in Kaala Teeka. She participated and became the winner of Nach Baliye with Shaleen Bhanot. In 2019, she participated in the reality show Bigg Boss 13 as a contestant.

In 2004, she won the title of Miss Pune, as well as being a finalist in a number of other pageants including, Miss Navy, Miss Mumbai and Miss Maharashtra Queen. She made her television début in the Zee drama, Manshaa, and this was followed by appearances in CID, Aahat and Raat Hone Ko Hai.

The actress married Shaleen Bhanot 9 December in the year 2009. They have a son together. In 2015, she filed for a divorce accusing Shaleen of domestic violence.

She comes from a family of army background. Her father is a retired Colonel and her two elder sisters are in the defence services as Indian Army officers.