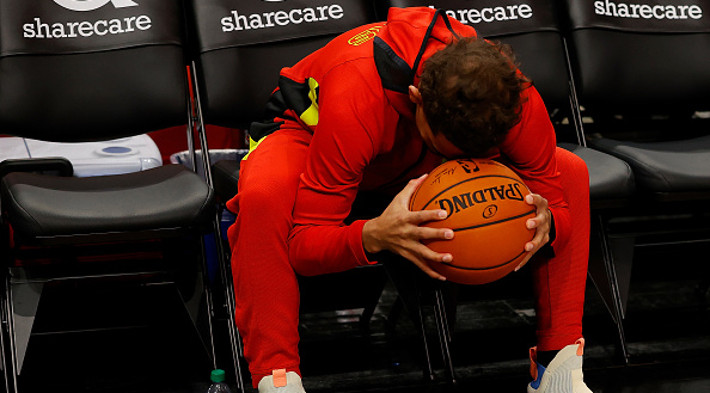 It was an emotional day across the NBA, to put it mildly. Kobe Bryant’s death hit the league hard, as news of the tragic helicopter crash that took his life and the lives of his 13-year-old daughter Gianna and seven other passengers has left the NBA family reeling.

There was some thought that the NBA might cancel or postpone the games scheduled for Sunday, but instead they proceeded as planned, as teams and individual players took moments out of each contest to pay tribute to Kobe in various ways including, eight-second and 24-second shot-clock violations in honor of the two jersey numbers he wore during his legendary career.

Trae Young also started the Hawks game against the Wizards wearing a No. 8 jersey to pay homage to his idol before switching back to his regular No. 11. But he didn’t stop there. In true Kobe fashion, Young went on a blistering scoring streak as he led Atlanta to a 152-133 victory over Washington, finishing with 45 points, 14 assists, and six rebounds, including this incredible buzzer-beater at half-time.

Young showed off his incredible shooting range throughout in what was an emotional performance for a second-year player that was a massive fan of Kobe growing up.

Everyone from Shaq, to Michael Jordan, to Magic Johnson, to Neymar, and countless others have joined the rest of the NBA world in their grief at such a stunning and incomprehensible loss. Kobe has inspired an entire generation of up and coming NBA players who considered him their Michael Jordan and modeled their game after him, and what better way to honor his legacy than to put on an electrifying scoring display.