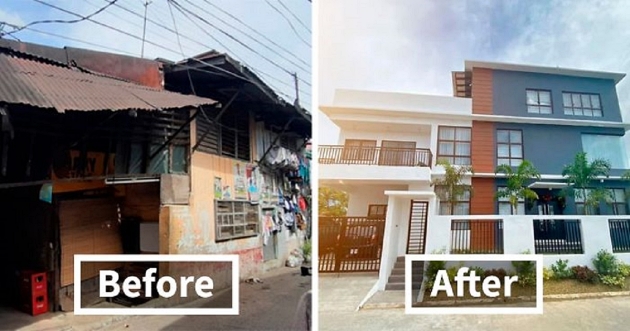 Everybody loves a story about an underdog who makes it in the end. While those stories are plenty in movies or books, they are so rare in real life. Sometimes, however, a story comes by that gives you hope again. This is one of those stories.

When Jayvee Lazaro Badile II was just a baby, he was adopted by a rather poor couple in the Philippines. He didn’t really have much to call his own when he was growing up, but he was thankful to have a loving family. They gave him a real chance at life. Now all grown up, he’s become a successful businessman. So he decided to repay his parents with the life they’d always dreamed of.

As he was growing up, he worked hard and remained dedicated. Recently, he was able to help his family build the dream house they had always imagined themselves living in.

He shared his journey in a Facebook post that has, of course, now gone viral. “When Nanay and Tatay adopted me, it wasn’t a good life,” the successful businessman wrote (Nanay and Tatay are words to refer to his parents). “Nanay is a vendor, Tatay is a porter. Now that I have the chance to give back to them, I will make sure they will live their dreams better than what they could ever imagine.”

“I was 3 months old when Nanay and Tatay adopted me. Life was very difficult. I had to be working as a student, and we were happy if Na got to make 2 meals a day. On top of that, we lived in a 20-square-meters (215 square foot) apartment.”

In his Facebook post, Jayvee shared, essentially, before and after photos. When the couple adopted him, they didn’t have much to their name. They had a small house that looked like a shanty.

Now, after the adopted son was able to climb up the socioeconomic ladder, he has built his family a house fit for royalty. The building is a luxurious mansion with seven bedrooms and all the amenities that a large family could possibly ever need or want.

“I paid for the house in cash and it was built in a year. It has 7 bedrooms, and we didn’t bring anything from the old place except the TV I bought for my family as a Christmas gift earlier.”

But that isn’t all. Jayvee ups the ante by taking things a step further. In addition to building his parents’ dream home, the businessman also treats them to vacations across the world. From nearby destinations like Singapore to countries in Europe and beyond, Jayvee shows them how grateful he is by spoiling them in all the ways he can. This includes buying them luxurious gifts like high fashion handbags and clothes.

However, most importantly, the greatest gift he gives them is… His time. Jayvee makes sure to spend as much time as possible with his parents and the rest of his family. Whether it’s big things like family vacations or the little things like watching a movie and grabbing dinner, he knows the incomparable value of time, love, and family.