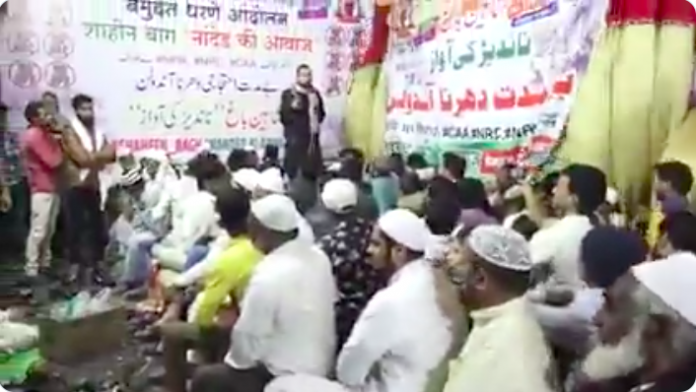 Student Islamic Organisation Maharashtra chief Salman Ahmed has been detained for making provocative statement during an anti-CAA gathering in Nanded earlier this month.

We wl nt listen to court too in this case like babri case.

In the speech, one can hear him say that this is not like Babri Masjid where Supreme Court judgement will be binding on all. “Shaheen Bagh has decided that CAA will be rolled back and the government must roll back. This is a fight for dignity. This is a fight for justice and self respect. This law will be rolled back and this government will also go. If these two things (CAA and the Narendra Modi-led government) stay, then nothing will remain. Muslim community is ready to do whatever it takes. This is not a strategy like Babri Masjid where we will have to accept the court judgement. We have made a decision, now Hindustan will have to accept it.”

In another clip that has gone viral, he shames Hindus for the central government passing the Citizenship Amendment Act. “You should be ashamed. Don’t come to show that there are Hindus against CAA. But be ashamed that this law came into being not because of Muslim votes but because of our votes. Muslims have not voted for Pragya Singh Thakur. You know who voted for her. Muslims didn’t vote for Yogi, you voted for Yogi,” he says. Salman Ahmed further tries to shame Hindus for electing these leaders. He further says that instead of sacrificing and putting in hard work to get the law rolled back, Hindus are telling Muslims what to do and what slogans to not shout. “You are not able to mobilise your community but you are telling Muslims free advice like don’t chant these slogans, don’t wear a skull cap, keep your religion at home,” he says.

Referring to secularism as ‘burden’, the SIO chief claims that it is not only Muslims’ responsibility to prove their secular credentials. Taking a dig at senior Congress leaders Shashi Tharoor and Rahul Gandhi, Ahmed says “Shashi Tharoor writes a book ‘Why I am a Hindu’ and he is a posterboy for liberals. One man shows off his janeu during elections, goes temple hopping and calls himself a ‘Shiv bhakt’, but if a Muslim identifies himself as Muslim, then they are called communal.”

Following his hateful speech, Ahmed was booked and later detained by Mumbai Police on Wednesday after he was traced to a hideout in Kurla.