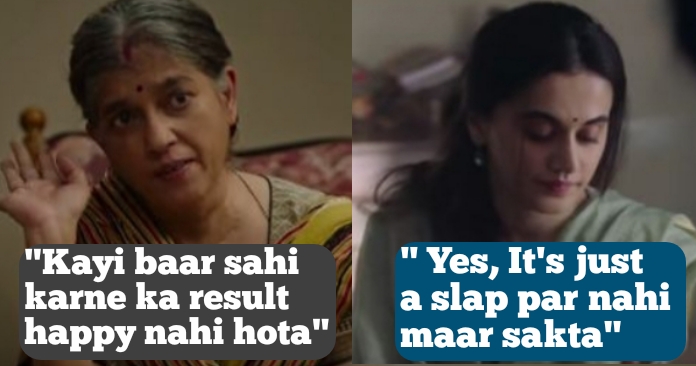 If we look at the records by NFHS(National Family Health Survey), we’ll get to know that more than 30% of women in our country face domestic violence and are exploited emotionally and physically at some point in their married life. Some women who face violence come forward while many still endure that life long pain as they don’t get to choose to raise their voice. If you’ll look into this matter, there’s much more to it.

According to another survey, it was proved that in the age group of 40 to 50 almost 54.8% of women face abuse in the hands of their spouses. Is it justified? Well to add more to it let’s clear out that almost 47.7% of those who face abuse are between the age group of 15 to 19. Imagine what it must feel like in that tender age. That’s why half of them don’t understand what’s going on with them and they just stay quiet.

In this upcoming movie “Thappad” we’ll get to fill in ourselves with the thought that just one ‘slap’ is also not okay and it is just the beginning of abusive behavior. Many may consider it just a normal thing in a relationship and that’s where the actual problem lies. We need to change our thought towards it because that’s not acceptable and we as women need to draw a line there.

When the trailer of this film was unveiled, we saw a happily married couple who were enjoying their married life. But when Amrita’s husband slaps her in front of everyone while he was engaged in a fight, just with that one slap which came out of rage destroyed everything they had in their relationship. She understood where she stands in their marriage and so decides to leave him as her love no more existed but her pride and self-respect did. Then she goes to an advocate and that’s where Amrita(Taapsee) is being asked the reason for leaving her husband. When she said he slapped her, the advocate replied “just one slap”. Then at that point she gets angry and replies ” just one slap, but no he cannot do it”. That reply sent a bold message to all of us and especially to those who held their voices down on these subjects.

But the trailer doesn’t just end with that thought, constantly Amrita had to go through a series of questions, not just by her lawyer but by her family, friends, and her husband. Important questions with gut-twisting subjects and gender dynamics are also put forward in that. But overall this film has already garnered a positive review and may be tagged as the most enlightening film.

In case you were wondering what are the important dialogues we’ll get to see in this movie. Then here are those that’ll justify everything discussed.