Home Internet These 7 Bollywood actors have aged Perfectly Well like Fine Wine in... 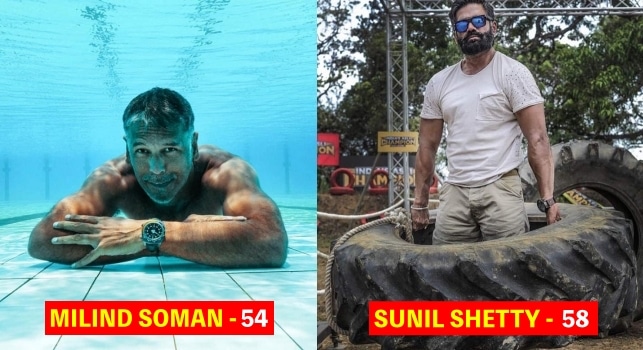 When it comes to ageing, we’re all equally scared. In fact, we’re so petrified that there’s an overabundance of creams that claim to get rid of crow’s feet in a night. And perfection-hungry as we are, we instantly buy into all the false promises that assure us the porcelain perfection. A little white hair is enough to send us into a fit about growing old.

While most Bollywood actors stay fit because they’re required to, there are some who just embrace ageing in the most beautiful way possible. The actors have to work hard to get that perfect body to stay at the top and most of the actors who are ruling the industry are above 50.

They adapt and change with the constantly evolving style, and Bollywood is full of such inspiring examples. While some men their age are busy romancing female actors half their age, these men have moved beyond that. They have re-invented themselves and how! After all, isn’t age just a number?

Here’s a list of 7 ageless hunks who have crossed 50 but thrashed every stereotype related to age.

Women all over the globe drool over the dimpled smile, sculpted body and handsome looks of Shah Rukh Khan. The 54-year-old actor has given not only his peers but also the coming-of-age actors a run for their money. While the actor’s six-pack abs in the 2007 film Om Shanti Om made heads turn, his second avatar with eight pack abs in the 2014 release Happy New Year mesmerized his fans and critics alike. After achieving such a chiseled body, SRK proved that if one works hard and has the right approach, no goal is impossible to reach.

Salman Khan is amongst the shirtless superstars of Bollywood who never fail to impress their fans. Even at the age of 54, the actor has managed to maintain that physique, which every newcomer wishes to achieve. The actor took his fitness to the next level by getting a gym constructed on the sets of his film Bharat. Salman often shares photos and videos of his workout regime on his social media accounts.

There is a reason why Akshay Kumar is also known as the Khiladi of Bollywood. He has not only treated his fans time and again with his high-octane action sequences, but the disciplined lifestyle that the actor leads is rarely seen these days. The 52-year-old superstar does not seem to stop anytime soon. Reportedly, Akshay will be seen performing daredevil stunts in Rohit Shetty’s next film titled Sooryavanshi.

He’s rightly called the Arnold Schwarzenegger of India. His acting skills have been compared to a piece of wood. But there’s no denying that when you say 90s Bollywood, you can’t picture it without Suniel Shetty. Unless you’ve been living under a rock, which is under a submarine, which is under a ship, which is on a faraway island with no human presence, it’s impossible you haven’t seen Suniel Shetty’s latest photos. The man re-invented himself and shocked us all. This man has upped the ante of ageing gracefully for sure.

Do I even need to write anything for this man? Made In India se lekar Iron Man tak , this man has raised the bar for every person alive right now. If there was an award for ageing well, Milind Soman would have been a clear winner. The actor seems to age gracefully. He looks hot with his white beard and his dapper looks at the age of 54.

Aamir khan is acknowledged as Mr. Perfectionist in Bollywood and to sustain that name, he works hard on his looks. We have seen him as one of the hottest looking superstars of our generation so far. He always does things out of the box and comes up with something exciting for his audience. He is known for his marvelous body transformations for different roles. He put a lot of effort to achieve his barrel-chested body for his 2008 release Ghajini. Then he surprised his fans once again with his shocking and remarkable transformation in Dangal.

He is the rock star of Bollywood. One of the best looking actors in the film fraternity. Sanjay Dutt won our hearts after he starred in ‘Munna Bhai MBBS’ and there’s has been no going back since. The talented actor is more than just fit at the age of 60. He has learned how to keep his body in perfect shape sans using any gym equipment. He prefers going the natural way to keep himself in shape.

Like fine wine, these gentlemen have aged perfectly well.