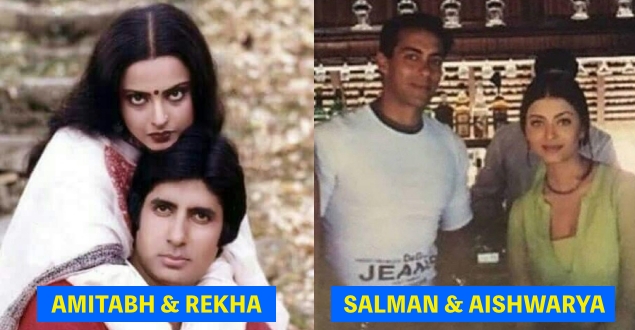 We have seen many Bollywood celebs , who acted together and fell in love . Also they had a successful marriage . We have examples likewise : Kajol – Ajay Devgun , Saif Ali Khan -Kareena, Rishi Kapoor- Neetu Kapoor, Dharmendra-Hema Malini and how can we forget the recent knot tied between the two youth icons Deepika and Ranveer Singh .

The couple had those blooms of love during the shooting of movie ‘ Silsila’ . Tales of the two’s love stories were not hidden by anyone . Even their fans wish till date that these two should have got married Amitabh and Rekha had an affair even after marriage. They were last seen together in this film. Since then, these stars have never appeared onscreen nor offscreen.

Well !! this is the most popular love story that had a brutal ending . Salman and Aishwarya’s love story started in 1997, Salman had become a superstar at that time. But at the same time, Aishwarya had just entered Bollywood after winning the title of Miss World. They got those love vibes during the shooting of ’Hum Dil Chuke Sanam’. Later Salman asked Aishwarya to marry, but since Ash was climbing the stairs of success, therefore, she said no to him.

The love story of Dilip Kumar and Madhubala is also famous . They even had engagement but Madhubala’s father did not like Dilip Kumar . He was against their marriage . So , Dilip Kumar made a condition before their marriage that she will not have any relation with her father post marriage , neither she will work that means she had to stop her acting career as well . Madhubala denied to do so and their relationship just turned off and ended .

Nargis and Raj Kapoor’s love story was also very popular in the film industry. Even today people remember their love story. The two used to love each other, but their relationship ended tragically. Raj Kapoor was married when he fell in love with Nargis. He neither wanted to leave Nargis nor his family. When Nargis realized this, she was completely broken. Meanwhile, Sunil Dutt came to his life and then both got married.

The love story of Mahesh Bhatt and Parveen Babi is also no less than a film love story. The girl next door and wanna be Parveen Bobi was a superhit actress at that time but due to Mahesh Bhatt’s love, her career was ruined. Her name has been associated with many stars but most of all her name was in the headlines with Mahesh Bhatt. According to the news, Parveen and Mahesh used to live in a live-in. But the two could never be one. It was with this relationship that Parveen was surrounded by a mental illness that Mahesh Bhatt described as Paranoid schizophrenia in many of his interviews.

All of these love stories are memorable to their fans and they always wish that the couple would look lovely in real life too..