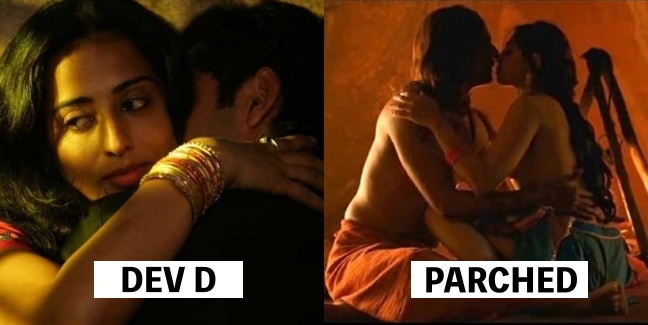 As they say.. movies make us learn a lot . They are basically the tutorials . From the action sequence to the romantic encounters , films have all that masala factor to attract .

In this film, Aditi (played by Tabu) is a young, housewife who yearns for her husband’s attention and physical affection. He stays away from home for work, during which she develops a relationship with her music teacher. Years later, when her husband confronts her for infidelity, she raises certain pertinent questions about female sexuality and points out his hypocrisy for not questioning his own extramarital affairs.

In this modern adaptation of Dev.D, Paro isn’t a coy woman waiting for her lover. Instead, she takes charge of her life and even initiates sex with the man she loves, Dev. However, her confidence irks his male ego and he breaks up with her for having an active sex life. In doing so, Dev represents millions of Indian men who are uncomfortable with the idea of women taking ownership of their bodies and desires.

While urban women have been able to move away from social stigmas associated with pre-marital sex, in rural India, it’s a different ballgame altogether. In this movie, three different women have distinctly unique approaches to sex. While one believes in the sanctity of marriage, the other has sexual relations with multiple partners. The film throws light on how, no matter what a woman does, she will always be criticised by a largely sexist society.

# 4. Lipstick Under My Burkha

Four women try to break the trappings of their lives by accepting their sexuality and moving forward with it. However, they have to either do it in a hush-hush manner or bear the brunt of society. While the movie follows their unique journeys, it also shows how they are all resigned to the same fate: a culture that chastises women for the same actions that are assumed to be common practices for men.

What do you guys think about these movies?